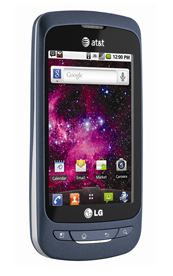 AT&T has finally decided to give pre-paid customers a reason to use its services with its very first GoPhone smartphone – the LG Thrive. Pre-paid providers like Boost Mobile and Virgin Mobile have been offering Android smartphones for some time now, so it’s about time AT&T gives its users some better pre-paid options.

The LG Phoenix is its post-paid counterpart, and both have the following specs:

They aren’t the top-of-the-line Android smartphones that are making headlines these days, but they’re certainly equipped to get the job done. For more details on the devices, see the press release below.

AT&T is a pioneer in smartphones and devices, and expects to widen its portfolio in 2011.

In January, AT&T committed to a robust Android portfolio, including more than 12 new Android devices this year. Delivering users on-the-go access to the growing Android Market™, LG Thrive™ will be the first Android smartphone available for GoPhone customers.

In addition to providing access to applications and contacts, AT&T is introducing a new prepaid data package with the LG Thrive, offering 500 MB of data for $25.  Each of the following options are available to customers who choose the Smartphone $0.10/min Plan or Smartphone $2/day Unlimited Talk and Text Plan. Prepaid customers who choose a smartphone like the LG Thrive must choose a data package in order to use data services.

The above data packages include unlimited Wi-Fi usage at thousands of AT&T Wi-Fi hotspots from your smartphone.

AT&T is also adding value to data pay-per-use pricing for non-smartphone customers with five times the data for the same price.  The new pricing is $0.01 per 5kb (previously $0.01 per kb).

LG Thrive™ boasts the latest Android features, including robust HTML browsing, integrated synching of Google ™ account features, Facebook® and Twitter apps for social networking, flexible personalization with up to seven customizable home screens, and unlimited Wi-Fi usage at thousands of AT&T Wi-Fi hotspots nationwide, included as part of the smartphone data plan required with either device.** LG Phoenix™ offers similar features to its prepaid counterpart as well as Mobile Hotspot and data tethering support which allows the sharing of the phone’s mobile broadband connection with other devices.***

On April 17, AT&T will begin selling LG Thrive™, in silver for $179.99. To use data services on the Thrive™, a GoPhone smartphone plan and data package are required.

The LG Phoenix™ will be available on the same day in dark blue for $49.99 and requires a two-year agreement.

Both devices will be sold in company-owned retail stores and in select national retail locations.

Learn more about the LG Thrive™ and LG Phoenix™ at www.att.com/mobilephones-news.

“We are excited to add LG Thrive™, the first smartphone for GoPhone, to AT&T’s growing Android portfolio,” said Judy Cavalieri, vice president, Voice and Prepaid Products, AT&T Mobility and Consumer Markets. “Thrive brings more choice and more value to our GoPhone customers by delivering the benefits of a smartphone, balanced with functionality and affordability.”

“The range of smartphones available at LG and AT&T is a tribute to our consumers,” said Tim O’Brien, vice president for marketing for LG Mobile Phones.  “LG Thrive optimizes data capabilities and value with a fully customizable experience.  We look to continue our history of AT&T firsts.”