Yet another report has come out today claiming that Android has overtaken iOS globally. While this may mean very little to investors, the strategy behind Google’s geeky mobile OS has gained traction virtually everywhere it can, and InMobi is yet another firm to claim just that.

One thing that Google’s OS can now claim – and something you wouldn’t have thought twice about two years ago – is mindshare. Mindshare was something that always kept people coming back to Apple and its iPhone, and that still is the case for many. However, Android has grown up a lot over the past two years, and for every iPhone commercial you see on TV, there’re about 4 Android commercials. The OS is everywhere, and is now a household name that many people won’t forget when walking into a store to purchase a handset.

“The global smartphone revolution continues into Q2 2011. The introduction of Android has significantly accelerated smartphone growth, as it brings a wealth of options to consumers.” 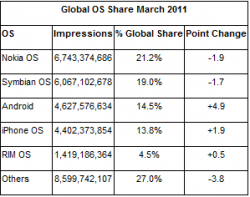 To no surprise, the smartphone growth is on a meteoric rise, with Android leading the way.

Globally, Nokia still remains the leader in terms of marketshare, grabbing 40% (Nokia OS and Symbian), where Android follows with 14.5%, and iOS with 13.8%.  This is the first time Android has eclipsed iOS share in the InMobi network. It’s worth noting that this particular network of sites is rather small. As Android’s momentum keeps churning, the gap between the two will only grow larger, but rest assured, Apple may sell less handsets, but it’s making more money off of you, which is a good thing if you’re a holder of Apple stock.

The cock-fight between iOS and Android will continue and get more aggressive over time, but this will only benefit the end users at the end of the day. So fight on!

Apple released the highly anticipated iOS 4.3.2 update for the iPhone and the iPad today. The Verizon iPhone also got...