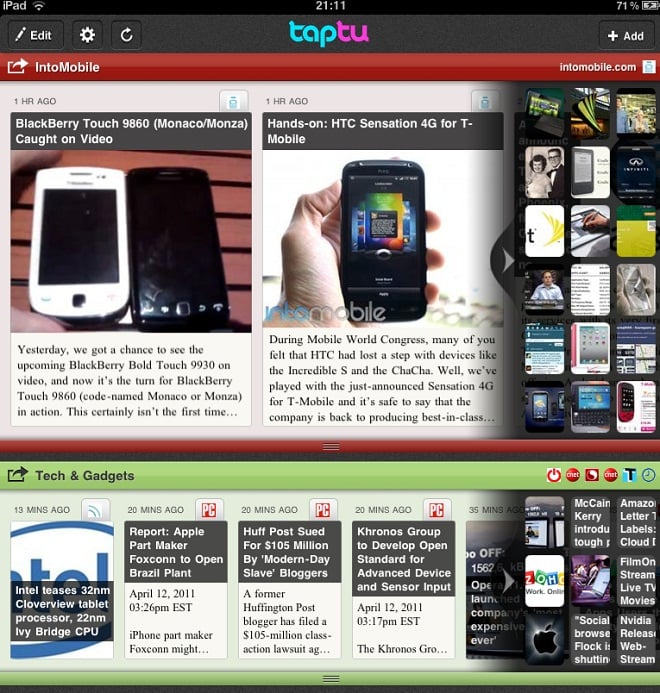 The Taptu iPad app is trying to horn in on the Flipboard space by turning your tablet into a beautiful news reader. The Taptu folks are taking a different approach though, as the company wants to give users the same amount of control over their news streams as DJs have over mixes.

The Taptu iPad app will draw in RSS feeds, searches and social network links from Twitter and Facebook into a visually-pleasing user interface. It’s similar to the company’s Android and iPhone apps but it has been blown up to better take advantage of the tablet’s additional real estate.

It’s the little touches that I appreciate: the little Rubik’s cube-like display of the upcoming stories or the the deep personalization options. Because the company’s roots are in mobile, touch-enabled search, the Taptu iPad app can utilize its platforms to do things like find and remove duplicate stories from your stream.

The company is really making a big push with the customizable aspects of the Taptu iPad app, as you can dive into each stream to make it your own. You can combine different RSS feeds, or take the crafted Taptu streams and remove certain sources. Eventually, you’ll also be able to pick and choose which social network friends you get links in your stream from.

The Taptu iPad app isn’t quite perfect though, as you can read the stories through an in-app browser but you can’t play videos yet. The company promises that will be coming in the future but, for now, you may have to stick with something like Showyou for your social video consumption.

I’ve used this program for a couple days and it is a fun way to get your news. I really do miss the ability to watch video within the app though, so I can’t fully recommend this until this feature is live.

Apple's lack of credibility in the web services arena is at some point in the future going to bite them...