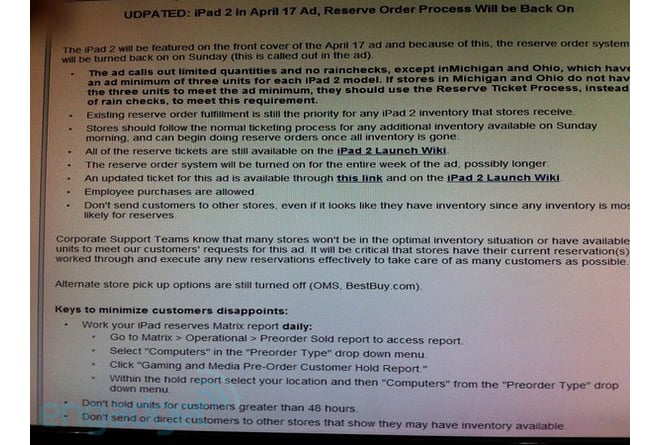 If you have not purchased an iPad 2 then you may want to stake out you local Best Buy tomorrow morning. According to a leaked memo obtained by Engadget, the electronics retailer may be selling the iPad 2 in a nationwide promotion. The sale begins Sunday April 17th and each store is rumored to have three of each model in stock. The sale will be first come, first served. Customers with a previous reservation, though, are supposedly allowed to get first dibs on the devices and employee purchases are apparently allowed as well.

This promotion was hinted at earlier this month when a circulating rumor suggested Best Buy was withholding iPad 2s from their customers. This sales practice supposedly made Apple angry and the Cupertino company ordered the electronics giant to pull their stock of Apple tablets. Best Buy addressed this rumor and confirmed it was partially false. The retailer stated it was withholding iPad 2 tablets from walk-in customers but was doing so to stockpile the tablets for an upcoming promotion. This is reportedly a standard retail practice and Apple was did not force the electronics retailer to stop selling its popular tablet device.

Now that the promotion may be launching tomorrow is anyone going to try to snag one from Best Buy?