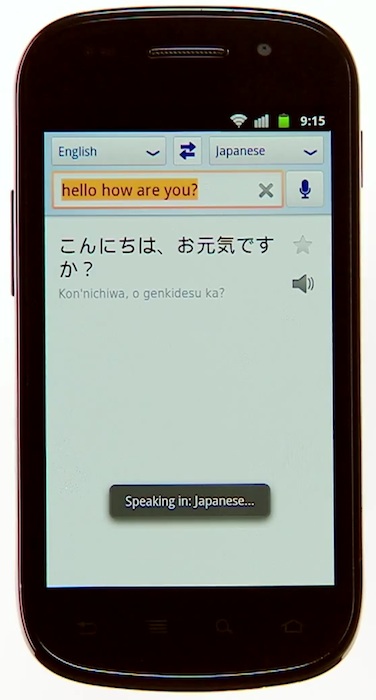 Google Translate is a modern marvel, seamlessly taking snippets of text, or even complete websites, and translating them in milliseconds from one language to the other. It may not be an exact translation, but it’s good enough to get the general idea of what’s being said. Users of Apple’s iPhone and devices running Google’s Android have been enjoying a dedicated Google Translate app for some time now, and it looks like Android users are getting preferential treatment with the latest version that was just announced. With the new version of Google Translate text that’s spoken sounds much more human like, and text to speech support for Japanese, Arabic, and Korean has been added. There are now a total of 58 languages you can translate to and from in plain text and 24 that can be spoken aloud. You’ll need a device running at least Android 2.1 to use this app, which seems a bit silly to us, but then again most of the latest devices hitting the market area already running 2.2.

We’re curious to hear just how often people are using Google Translate. If you use Google’s web browser on your computer, Chrome, then anytime you visit a website that isn’t written in your native language, Google will ask you if you want to have the site translated. That’s pretty powerful stuff and makes the world that much smaller since we can all understand each other. Then there’s people who travel extensively, either for business or pleasure, they probably use this app a countless number of times while going about their day. Don’t forget people who live in countries that have more than one official language, or soldiers who are stationed abroad and have some free time to mingle with the locals. The use cases here are endless.

What does Google have to gain by making this free? Nothing, except some pretty big fans.

Quick note here for Canadian mobile junkies looking for a new Android device to throw in their personal lineup. In...