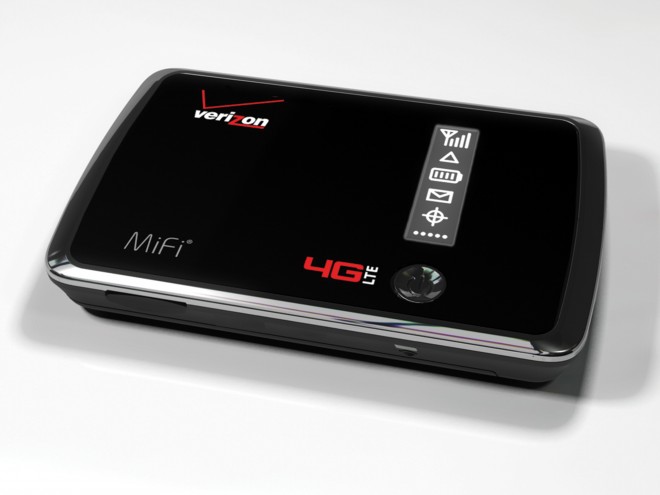 If you want to ride high on the Verizon 4G LTE hog but don’t want one of the huge computer dongles and aren’t convinced the HTC Thunderbolt is the right device for you, you’ll be happy to know that you can now pick up a Novatel MiFi with 4G speeds.

The Verizon MiFi looks very similar to the Sprint version we reviewed about a month ago, as it will be 3G/4G capable and it will show you battery life and signal strength on the face of the device. The major difference is that the Verizon MiFi will use 4G LTE instead of WiMax and Big Red is promising download speeds of 5 to 12 Mbps and upload speeds of 2 to 5 Mbps when you’re in a coverage area.

The Verizon 4G LTE MiFi can be purchased online for about $100 on a long-term contract but you can get it for $250 without signing a contract. We’re encouraged to know that the non-contract prices should be the same as those with long-term deals.

I’m a big fan of the Verizon 4G LTE network so I can’t wait to get my hands on this MiFi. I used a too-big dongle during my time at CTIA and it was nearly perfect for me. The only beef I had was that the dongle itself was too big, so a MiFi should help solve that problem, as well as let me connect multiple devices.

We also have our hands on a Samsung hotspot which can also utilize Big Red’s next-generation mobile data network and we’ll have a full review of that in the next few days.

What’s your preferred method of connecting, friends? The dongle approach is generally fool-proof, the MiFi approach lets you get multiple devices online at once and the mobile hotspot option from a phone is the epitome of convenience but all of these have negatives.

Sprint chief Dan Hesse today took aim against the pending AT&T and T-Mobile deal that could radically affect the US...