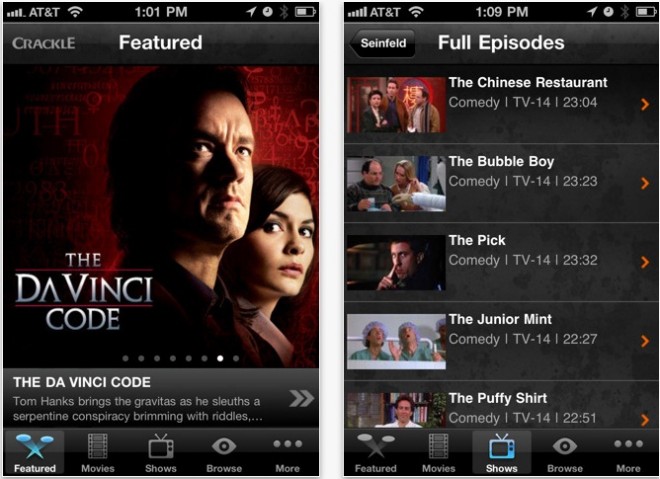 The iPhone and iPad aren’t lacking multimedia options but the new Crackle iOS app may help stand out from the crowd by offering free, well-known TV shows and movies.

Think of the Crackle iOS app as a Hulu Plus for free with less modern content. The just-released app lets you watch movies like “The Da Vinci Code,” “Snatch,” “Quarantine” and others.

The super cool thing about this (to me, at least) is that the Crackle iOS app lets you get Seinfeld on the go. That’s right folks, you can find out why these pretzels are making you so thirsty on the go. There are only 10 episodes available at launch but this is the only online service that I can think of which can watch Seinfeld.

The Crackle iOS app actually comes from Sony, as it owns the Crackle website, so that’s why there is such good content on it. As you would expect, you’re going to have to sit through some ads to watch the videos but at least you’re not paying a monthly fee and watching ads like with Hulu Plus.

You can download the app here from iTunes and it’s free.

Yesterday we reported that Square, the credit card reader for the iPhone, iPod touch and iPad, was being sold by...