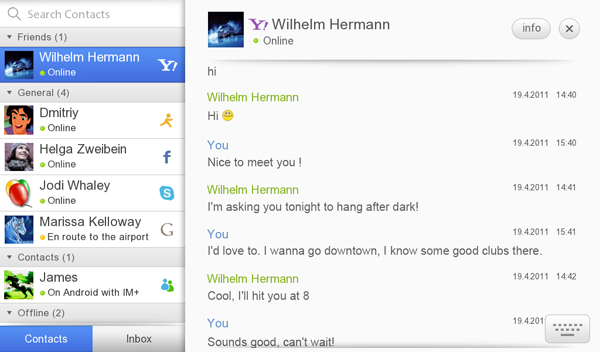 To all the BlackBerry addicts out there, I hope you enjoyed PlayBook launch day! If you tossed down some cash to pick up RIM’s first venture into the tablet scene, good on ya… and if you haven’t already, be sure to check out Simon’s BlackBerry PlayBook Review. It’s good stuff, I swear.

With tablets clearly on the brain of many developers out there, I received a little note from the folks at SHAPE Services not so long ago. In the note, they wanted to let ME know to tell YOU that a new version of IM+ with PlayBook compatibility is coming in May. They even shared a screenshot with me (see above). If you’re a regular user of IM+, this is good news. Well, it’s good news if you have designs on picking up a PlayBook!

I’ll keep my ear to the ground for more from SHAPE services… I have a feeling we’ll hear more from them real soon.

Getting back to the PlayBook, I do have my own thoughts on the device, but am going to hold them back because I haven’t been able to spend much ‘quality’ time with the tablet just yet. I was fortunate enough to sit down with one last week over lunch… and at first blush, I was impressed with the overall build quality of the tablet. The OS on the other hand… well… it’s not as intuitive as I might have hoped, but that said, the learning curve is super-dooper fast… and any die-hard Berry user will pick it up in no time.

Hope you’re enjoying BlackBerry PlayBook launch day… Let’s hope that developers keep their heads down to pump out apps at a furious pace. We could use a little more PlayBook app love!

Note: I just noticed… that’s a bit of a creepy conversation in the screenshot isn’t it? Who is this Wilhelm guy? He wants to hang with me after dark? Why?

Sony Ericsson Xperia Arc may hit the US this summer

We're still hoping to see the Sony Ericsson Xperia Play released in the US, and now we're hearing that the...