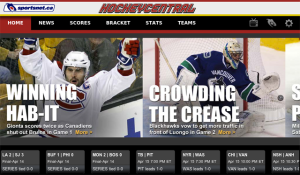 This addition joins a successful family of Hockeycentral apps. Previous editions for iOS (iPhone and iPad), BlackBerry OS and Android have already been released… and they’re all good. That is, if you’re a die-hard hockey fan.

Hockeycentral for PlayBook will deliver much of what you’d expect (news, scores, videos, etc.), all on the beautiful display of your brand new tablet. Melody Adhami, President at Plastic Mobile (co-developers of the app) commented on the news:

“With playoff hockey in full swing, this app will become your immediate guide for all hockey news and analysis… Being hockey fans, we really enjoyed working with the team at Sportsnet and the Mobile product development team at Rogers Digital Media to build the application for the launch of this exciting new tablet”.

So there you have it. All the hockey news, scores, videos, updates, stats, you name it… all available now on the latest hardware from RIM. Load ‘er up, and enjoy the rest of the 2011 Stanley Cup Playoffs!

RIM's big show of the year, BlackBerry World, is kicking off early next month, and we're already expecting them to...