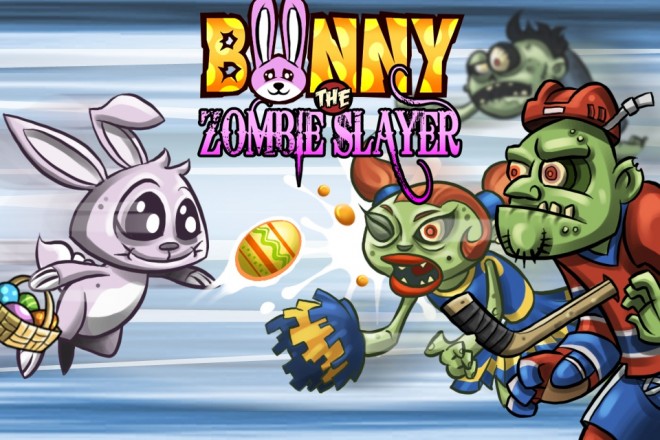 Easter is right around the corner which means children will be tasked with finding hidden eggs all around their home, paint Easter eggs, and eat chocolate bunnies. But there’s one little Bunny who won’t be enjoying the traditional Easter festivities as he’ll be too busy saving all of the children from wave after wave of zombies. He is… Bunny… the Zombie Slayer!

Bunny the Zombie Slayer is the first iOS title from Canadian developer Hothead Games, who were the developers of two great titles: Penny Arcade Adventures: On The Rain-Slick Precipice of Darkness and DeathSpank. The game has you controlling Bunny who is protecting children who are searching for his eggs from waves of zombies. And what better way to protect the children than with an arsenal of brightly colored eggs. In order to attack the zombies, the player needs to touch the screen to aim where they’d like Bunny’s eggs to go and then fire the eggs at the zombies. Bunny the Zombie Slayer also has a number of secret eggs that will allow him to throw eggs with special powers.

Bunny the Zombie Slayer isn’t your typical Easter game, although some people may think the resurrection of Jesus could be considered Zombie-esque so it kind of makes sense why Bunny would be fighting off waves of zombies. The Easter Bunny and Jesus have been duking it out for Easter supremacy for years now. I wonder if Hothead Games would release a Zombie Jesus game where he slays wave after wave of adorable bunnies with either small crosses or cups of water turned to wine?

Skyfire's custom browser for Android is making the big leap to 4.0 today, adding a few more customization options to...