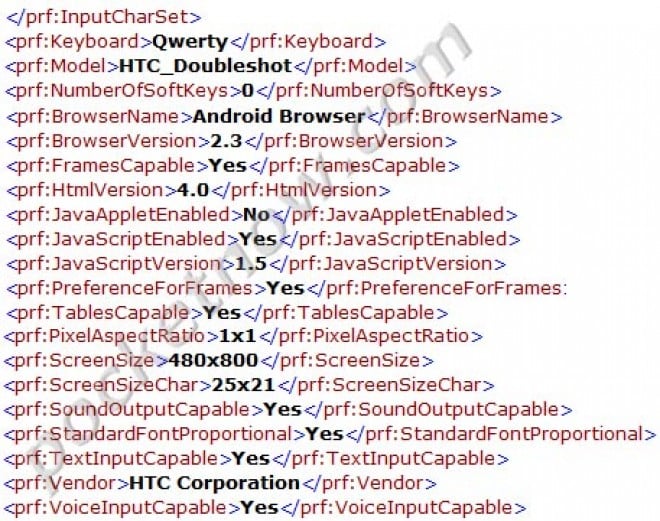 Early last month we got word of an upcoming device from HTC destined to land on T-Mobile USA, the Doubleshot. At the time, very little was known about the device, and we weren’t even leaving out the possibility that it could be a tablet of some sort. Well, we still may not know all the technical details of the Doubleshot, or even what it looks like, but some light has been shed on the device.

The Doubleshot looks to be an Android Gingerbread device with a QWERTY slider, according to the user agent profile above. Other reports claim that the device will sport a 1.2GHz dual-core processor, and possibly stereoscopic cameras, which would make this quite a powerful piece of hardware. Though unconfirmed, the Doubleshot will likely be sporting HSPA+ support, as that seems to be the trend with T-Mobile’s new high-end devices, not the mention a logical feature to implement into such hardware.

Mobile technology moves very fast, and if this QWERTY-toting slider is as nice as the rumored specs make it out to be, we wouldn’t be surprised if the Doubleshot may replace another device, like the MyTouch Slide. The upcoming handset could be another HTC Sense device to give users an alternative to the sexy Sensation, and the Slide is just begging to be replaced. Whatever the case may be, if rumored specs are to be believed, T-Mobile doesn’t look like it will be in short supply of powerful Android handsets this year.

There’s still a lot that’s unknown and unconfirmed at this point about the Doubleshot, but we could imagine that we’ll be hearing more rather soon. Whether it’s in the form of more specs, or a leaked picture or two, we’ll be here to tell all.

Would you think twice about grabbing the HTC Sensation if a similarly feature-packed Android slider was on the way?

The somewhat elusive and not-so-mythical white iPhone 4 - you know, the one that has been popping up in inventory...