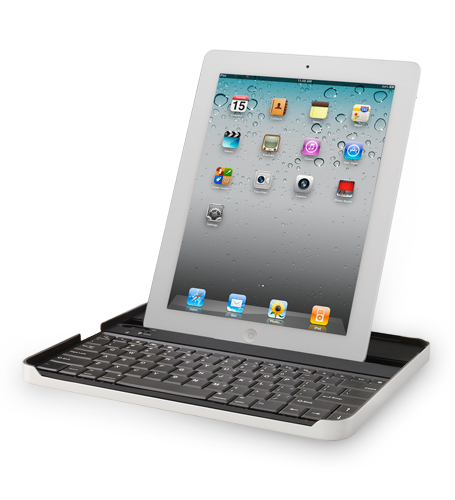 Say you’re one of the millions of people who purchased Apple’s latest tablet device, the iPad 2. Chances are you want to protect your investment, especially since your little toy set you back a pretty penny. There’s always the official “Smart Cover” that uses magnets to stick itself to the side of your iPad, but what if you’re a student or someone who does a lot of text entry? Enter Logitech’s Keyboard Case. While it doesn’t have the most inspiring product name out there, just look at this thing. For $100 you get a full keyboard that enables you to use your iPad in either portrait or landscape mode, thank Bluetooth technology for that, and you also get a layer of aluminium to make sure your screen doesn’t get any scratches or chips. We don’t know the exact dimensions of this thing, or when it’ll actually ship, but the price is right if you’re looking to strike a balance between style and functionality.

Now for the bigger question, will Apple ever release a notebook form factor device that runs iOS? Stick an ARM processor into something the size of an 11 inch MacBook Air and you’ve got all day battery life. Then again iOS is designed to be used with a finger, not a keyboard and trackpad … so we’re inclined to think that this Logitech accessory is the closest you’re ever going to get to your dream convertible tablet. If you want something similar to this, but Android flavored, then there’s always the Asus Transformer. It’s a standard run of the mill NVIDIA Tegra 2 packing Honeycomb running tablet, but it also has a separate keyboard dock that runs about $150 that turns your tablet into a notebook.

Will the iPhone 5 resemble the iPod touch?