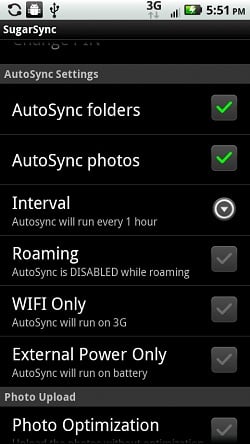 The SugarSync Android app has just received a major boost and redesign that includes the ability to automatically sync your phone’s data with a home computer, without the need for wires.

The company is calling this feature AutoSync and this allows the SugarSync Android app to automatically back up your photos, videos and other files to your computer. On its blog, the company describes it like this:

We also built AutoSync in a way that respects your battery, data plan, and wallet.

For example, you can tell AutoSync to run only when you are connected to a power source, to WiFi, or both. Let’s say you set AutoSync to only run when you are connected to WiFi and then you went camping in the middle of nowhere and took lots of photos. When you came back home, AutoSync would automatically detect a WiFi signal and upload all your photos. No need to change any settings, open SugarSync, or do anything. Again, it just works.

I’ve downloaded the SugarSync Android app on the Kyocera Echo I’m using now and will be testing it out for the next few weeks. I’ve been looking for an alternative to Dropbox for a long time now and this latest feature (along with SugarSync’s cheaper storage prices) could be the tipping point.

What do you think, friends? What’s your favorite cloud-storage service and why? I’ve found Dropbox’s simplicity to be unmatched for a long time but I don’t actually think it has the greatest of apps.

The SugarSync Android app is available in the Android Market today and you can sign up for a free 5 GB account. The paid plans start at $4.99 a month or $50 a year for 30 GB of service and you can purchase more storage space if you need it. Go ahead and try it out.

It was only a few weeks ago (12 to be exact) that we were looking at the IntoNow iPhone app...