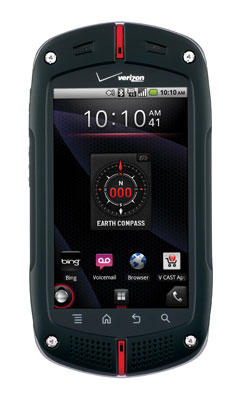 It’s an Android press release bonanza with Sprint launching the Nexus S 4G and Verizon announcing both the Incredible 2 and the Casio G’zOne Commando.

Casio has produced a long series of rugged  G’zOne handsets, most of which offered a rugged chassis, push to talk and a feature phone operating system. The Commando is the first G’zOne handset to move from feature phone to smartphone and keep the series rugged good looks.

The Commando is an Android handset which includes many of the standard Android features such as mobile hotspot and gmail as well as the following:

The CASIO G’zOne Commando will be available online starting April 28  and will set you back $199.99 with a new two-year customer agreement. As with other Verizon smartphones, the G’zOne will require an unlimited data plan for $29.99 per month. Any takers?

Another analyst says Motorola Xoom is a flop

The Motorola Xoom was launched with much fanfare but another analyst is indicating that it could be a flop or,...