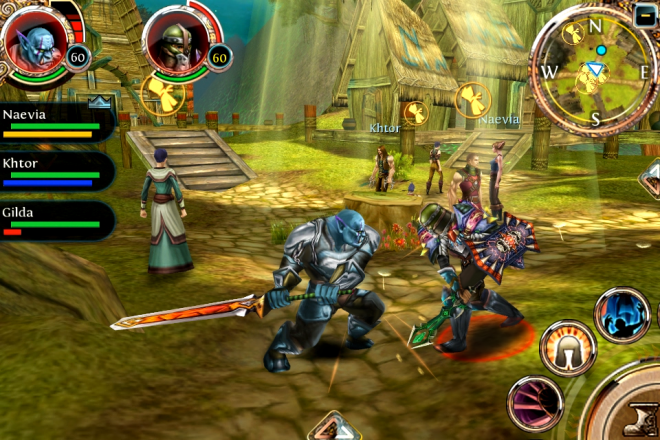 We’ve been keeping a close eye on Gameloft’s “Order & Chaos Online” and with good reason. The game resembles Blizzard’s insanely popular World of Warcraft and that’s a very good thing. A good number of our editors have lost sleep over finishing just one more quest or raiding with our guild mates and we can’t wait to do it all over again in Order & Chaos Online now that it’s available worldwide.

As with the majority of MMORPGs, Order & Chaos will have a subscription based model. Players will be given 3 months of access to the game when they make their initial purchase, but will need to choose one of three subscription models: $.99 for 1 month, $1.99 for 3 months, or $2.99 for 6 months. When you consider how expensive MMORPG subscriptions are, these prices are pretty low in comparison. Since this is the first MMORPG to launch on iOS, I’m happy to see Gameloft has kept the subscription prices low as future MMOs could use these prices as a model for their game.

Order & Chaos allows you to choose to create a character of the Order or Chaos faction. Each faction has two races available to them. The Order faction has Elves and Humans, while Chaos has Orcs and Undead. As for classes, players can create a Warrior, Ranger, Monk, or Mage with a maximum of four different characters allowed within a player’s Gameloft account. Hopefully Gameloft allows players to create characters of different factions on the same servers, unlike World of Warcraft. The game also requires you to have a Wi-Fi connection, which is a downer as I’d love to play Order & Chaos while I’m commuting through a 3G connection, as I’m sure many of you would too.

I’m a big fan of MMOs as I’ve spent countless hours in World of Warcraft in the past and I currently play DC Universe Online. Seeing an MMORPG on the iPhone & iPad is something that just blows my mind and it shows how games are progressing. No longer do you have to commit yourself to your PC or Mac in order to play an MMO, now you can stay glued to your iOS device in the comfort of wherever you have a Wi-Fi connection in order to play.