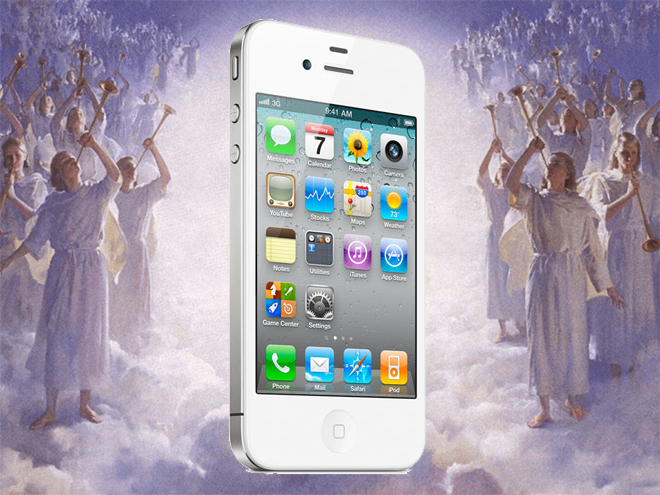 Well, my friends, it’s been a long ride, hasn’t it? We’ve laughed together, cried together, wrote an obscene number of blog posts and built an unprecedented amount of hype for a paint job together. After months of mewling from the fanboy masses and a few solid hints of a release over the last couple of weeks, Apple has announced that the white iPhone 4 is landing on Verizon and AT&T starting tomorrow. Availability as of April 28 (this Thursday) will include Austria, Australia, Belgium, Canada, China, Czech Republic, Denmark, Finland, France, Germany, Hong Kong, Ireland, Italy, Japan, Luxembourg, Macau, Netherlands, New Zealand, Norway, Singapore, South Korea, Spain, Switzerland, Sweden, Taiwan, Thailand, UK and the US, with the rest of the world following in their wake of Pure Apple Whiteness.

The iPhone 4, on the off-chance you haven’t heard of it, is Apple’s most recent smartphone, boasting a 5 megapixel camera with front-facing camera for video calling, a bar-raising 3.5-inch 960 x 640 display, the biggest app selection in the world, and the usual stuff like Wi-Fi, GPS, 3G, Bluetooth, and a magnetometer. Prices start at $199 for the 16 GB model, and $299 for the 32 GB model on a two-year contract. Check out our unboxing for an overall tour and impressions.

The reason for the delays of the white iPhone 4 were rumoured to be related to camera light leakage, ambient light sensor errors, and a mismatch between the casing and the home button, which one can only assume have all been fixed now that units are headed onto store shelves. Now, I’m curious if after all of this noise, the end result in terms of sales will be as anticlimactic as the iPhone coming to Verizon after years of AT&T exclusivity. I’m tempted to think so, since anyone really hurting for a white iPhone (much like those looking for a good smartphone on Verizon) will have found an alternative by now. Is anyone still frothing at the bit to get one of these?

Remember that Acer's 4.8-inch Android smartphone we've seen back in November 2010? Well it's inching toward AT&T's portfolio with FCC...