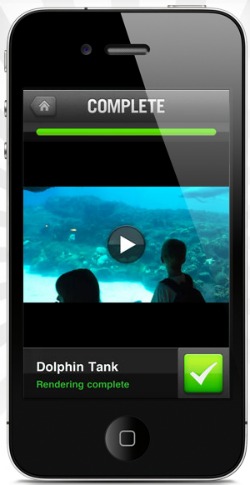 While at App Nation 2011, we got to get a quick little look at a video editing app that may give Apple and its iMovie app a run for its money. The Video Edit app is a $3 program which claims to render videos up to 10 times faster than Apple’s product.

The Video Edit iPhone app does exactly what you’d expect from its title: you use the app to build, edit, render and share your videos that you’ve shot with your smartphone. The company says that it believe the mobile video editing experience doesn’t need a ton of transitions, as users would rather just trim clips, combine them and get these processed quickly.

The Video Edit iPhone app uses some proprietary rendering technology to process your videos faster. Depending on the size of the video, the company claims that it can do this up to 10 times faster than the iMovie app.

Look for this program to come to the iPad 2 shortly and this should help users take advantage of the multiple cameras. The company said there’s a lot of work to be done to bring it to other platforms like Android because the rendering technology was specifically built for iOS but it is always willing to adapt to market needs.

I don’t know how successful it is to directly challenge an Apple product that is getting a huge marketing push but this shows that the development community can one-up the iPhone maker in certain aspects. Check out the video below and let us know what you think.