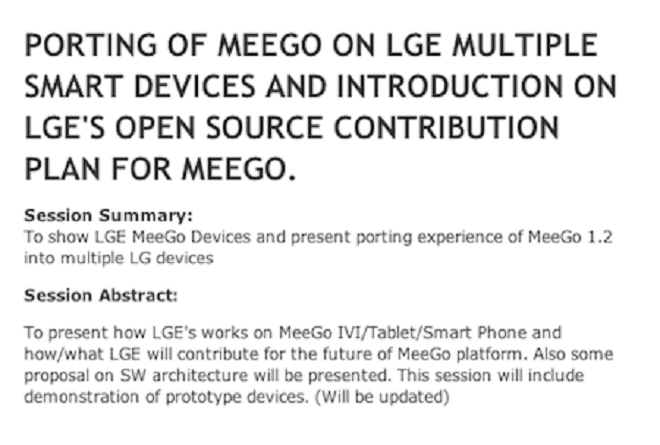 If you thought MeeGo was dead in the mobile phone space once Nokia is using Windows Phone 7, you’d be wrong. A session for next month’s MeeGo conference says LG will be showing off “prototype devices” and this could very well include smartphones.

This isn’t that surprising, as LG committed to developing a version of MeeGo for smartphones, even though it hasn’t committed to creating devices. It has only committed to making info-tainment system in cars.

I actually spent some time talking with Intel about its plans for MeeGo and it said that once the Nokia decision was announced, it heard from a variety of manufacturers who are now interested in the platform. While this is likely spinning, there could be some validity to this.

When Nokia introduced the Symbian Foundation, it was supposed to be an open platform that included contributions from other handset makers and carriers. Despite some commitments from other companies, Nokia was the only company to really use the operating system and the foundation folded.

MeeGo was the brain child of Intel and Nokia but now that the world’s largest handset maker is gone, there could be a vacuum for a handset maker. Earlier version of MeeGo we saw were still very, very rough but it still has the makings of a decent platform.

Because of that, I could see LG taking a leadership role in this platform even though it’s very early. Other smaller companies like Chinese OEMs or ODMs could also view this as a way to get into the smartphone space without having to buy in to the Google ecosystem.

In particular, I could see ZTE dabbling with MeeGo, even though it is doing great with Android. The company has rapidly cracked the top five manufacturers’ list but teaming with Intel could also give it an inside track to cheaper components. That’s all speculation on my part, though.

BlackBerry OS 6.1 to be Rebranded as 7? [Update: Confirmed]

The last we had heard, the new BlackBerry smartphones coming out (at least one of which will likely be announced...