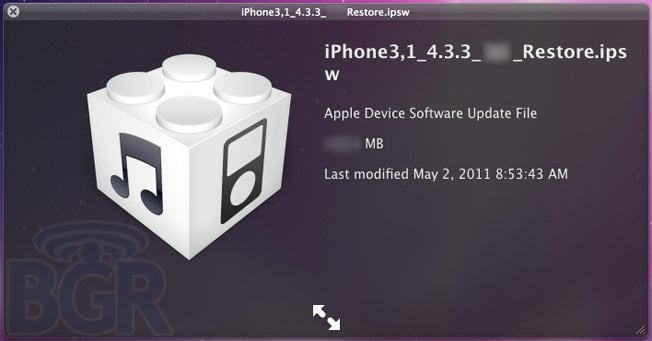 After a few short weeks of heavy criticism, Apple is rumored to be releasing iOS 4.3.3 soon to address a location tracking issue. For quite some time now, iPhone and iPad 3G devices had been logging and time-stamping its users’ location information and storing it in a file within its system. That information would then get backed up to a computer every time the iOS device was synced with iTunes. Users who downloaded the iPhoneTracker application were shocked to find just how accurate this information was.

Apple then released a statement telling its users that it is not tracking them, contrary to what the users were finding for themselves. It was a bit of unbelievable spin on Apple’s part – or lying, if you will – but it promised to fix the issue with a software update.

Software Update
Sometime in the next few weeks Apple will release a free iOS software update that:

In the next major iOS software release the cache will also be encrypted on the iPhone.

Those new features should be addressed in the coming update, or iOS 4.3.3.

According to BGR, the new software version will also include the following:

Hooray for battery life improvements and iPod bug fixes! But back to the matter at hand. While it was a little shocking to find that our beloved iPhone and iPad 3G devices were logging our location information, it isn’t inherently bad — it’s what can be done with that information. It was so horrifying to some, in fact, that the TV show South Park decided to poke fun at the whole matter.

In addition to this news, we recently learned that Google is under fire for the same issue as well, except the search giant is being sued for location tracking, whereas iOS users simply didn’t act to file a lawsuit soon enough, it seems.