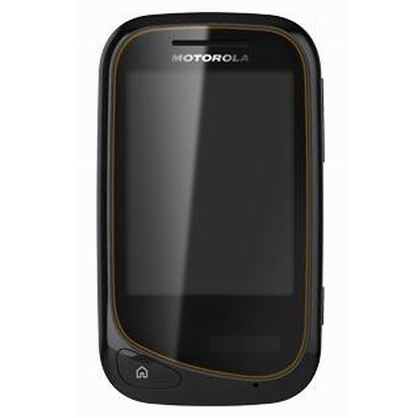 Motorola’s yet to be announced EX130 has just been leaked and while at first glance it appears to be just another feature phone with what we’re assuming to be a poor quality touch screen, a little surprise in the form of a second screen located at the bottom of the device is making us take a second look. The EX130 allegedly runs Qualcomm’s Brew MP operating system, which is a feature phone OS Qualcomm licenses out to anyone with a pocketbook large enough; even HTC has a Brew device out on the market called the Freestyle, available on AT&T. Back to the EX130, it features a 2.8 inch 320 x 240 pixel display, 128 MB of memory, 64 MB of RAM, and a one line monochrome OLED screen at the bottom with a resolution of 96 x 16 pixels. We’re sure there’s got to be a camera in there, somewhere, and while we don’t know whether this thing is for GSM or CDMA networks, there’s nothing holding back Motorola from making two versions that support each respective technology. When will this thing come out? How much will it cost? No clue.

Now about that second screen, this is the second time we’ve seen something like this; the first was the Samsung Continuum. When we reviewed it we were initially skeptical of the second screen providing any real benefits, but after carrying it around for a while it quickly became obvious that having an always on second display you can quickly glance at is a rather nice feature. Will more handset makers start adding this sort of functionality? It’s too soon to tell, but there was a reason clamshell form factor devices were so popular in America for so long. People liked having that second display on the outer shell to glance at.

Maybe it’s time for a come back?

AT&T is preparing a series of updates for the Atrix 4G and the Inspire 4G. The two updates include several...