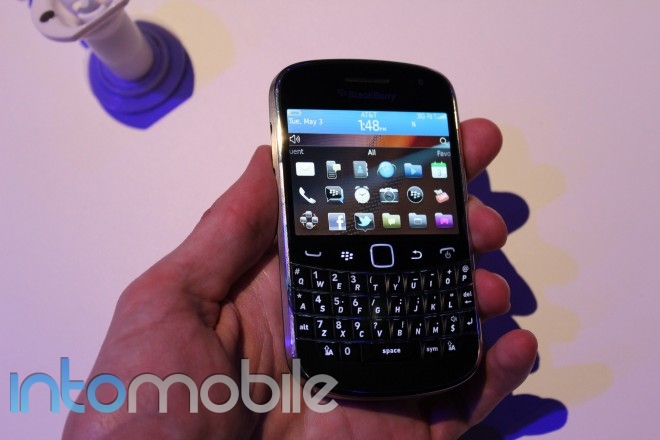 Yesterday, RIM announced the latest addition to the Bold family, the 9900, and at the BlackBerry World show we got some time to play around with it. It is indeed their slimmest BlackBerry to date, and the first in a long line of upcoming devices to support augmented reality apps, near-field communications, and big horsepower. The 9900 also brings a touchscreen to the classic QWERTY candybar form factor that BlackBerry has been sporting for so very long, which responds quickly and fluidly to input. The Bold 9900 runs an updated OS, branded as version 7, which, though not backwards compatible, will include extended Documents to Go features, and an updated browser rendering engine akin to the PlayBook (though missing Flash support).

As a BlackBerry fan, I’m very tempted to make the 9900 my next handset. It’s slim, will have respectable battery life with a screen smaller than the Torch (which isn’t much of a loss if you’ve got a PlayBook handy), and the 1.2 GHz processor will ensure the lags and hang-ups are a thing of the past. The 5 megapixel camera will be able to capture 720p video, which is more than enough for casual shares to Facebook. The increased screen resolution (640 x 480) will make up for in sharpness what it lacks in size. The one thing I didn’t see in my demo was mobile hotspot, a feature we were lead to believe would be in the device – I’ll be sure to check again here at the show, but if it’s not on there, it might be a dealbreaker. Mobile hotspot is a huge utility, and offers a lot more speed than what you can get through Bluetooth tethering.

What do you guys think? Is this too much more of the same buttoned-down safe-zone stuff RIM does, or is it good that BlackBerry is keeping what they do well and refining it for modern standards?

The Droid Charge is the second Verizon 4G LTE smartphone after the HTC Thunderbolt and the Android smartphone promises to...