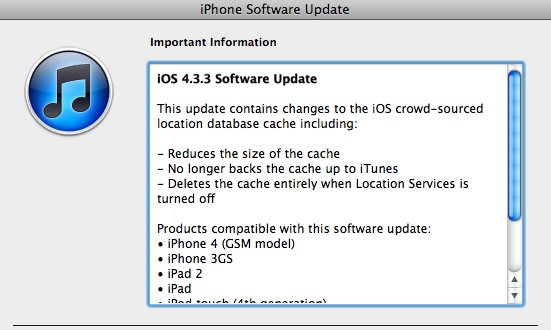 It seems like only yesterday that we were saying iOS 4.3.3 was going to come out soon to fix that pesky location tracking issue for the iPhone. Oh wait, it was two days ago, and just like that the update is available via iTunes. So if you’re terribly worried about your iPhone tracking you and caching and backing up that unencrypted information on your computer, you can fix that by updating now.

And if you’ve been living under a rock, perhaps this might all be news to you. Well, for quite some time Apple had been allowing the iPhone and iPad 3G to record its location information and the time at which the phone or tablet was at the location. Apple denied tracking its users, which was brilliant spin since that aspect of it was only incidental, but it clarified what it’d do to make everyone happy — release an update that would give users an option to shut off GPS/location data, and it would encrypt that data if it was on.

Rumors have been circulating regarding the release date - or at least a release time frame - for the iPhone...