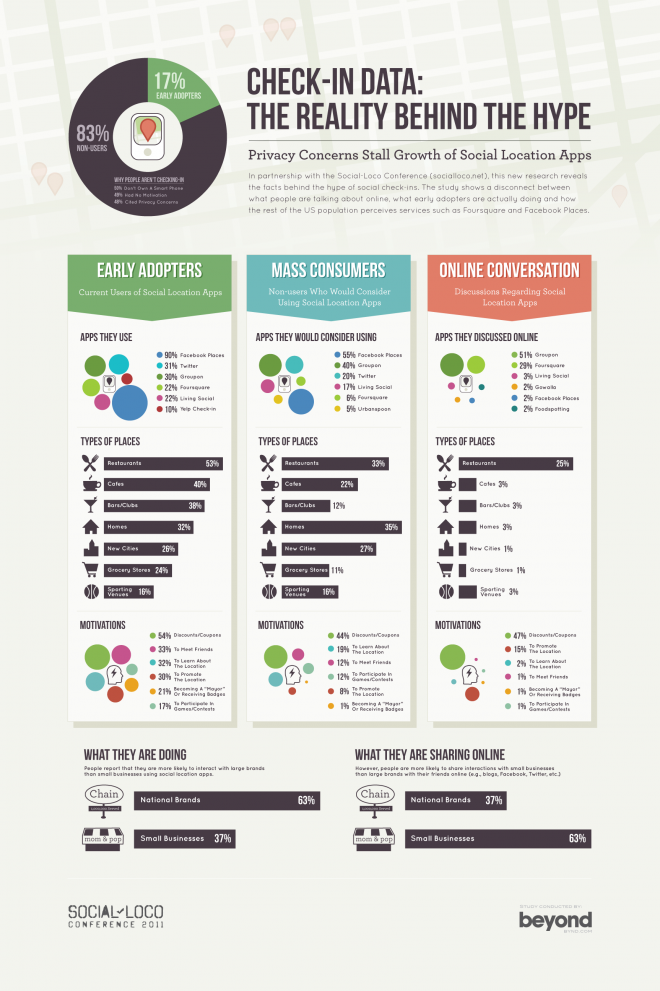 For those who have no problems sharing their location info with their social networks, it seems that Facebook Places is the top choice for letting friends and family know where you are, who you’re with and what you’re doing. It’s not surprising since location-based social networking apps like Foursquare seemed to be used by only a few early adopters. Facebook, whose user base exceeds half a billion people, really made the location-based social networking idea take off when it introduced Facebook places.

It was available only on the iPhone at first, but people really took to it. My own Facebook news stream is filled with friends’ check-ins at all kinds of venues. While Foursquare has nifty features like badges and tons of local deals, it just seems that Facebook is going to hold onto its position for a while since it has a bigger user base.

For those who don’t use location-based social networking apps yet, 55% say they’d considering using Facebook Places, 40% would use Groupon and only 6% would use Foursquare. The rest are divvied up between Twitter, Living Social and UrbanSpoon.

So, what are you folks checking into and sharing with your friends? According to the infographic, the top three venues are restaurants, cafes and bars or clubs. We love to eat and drink, apparently! And top of the list for check-ins that spur discussion are restaurants. Homes, new cities, grocery stores and sporting venues bring up the rear. Really? You guys don’t have a problem sharing your home location and check-ins? Brave social souls, you are.

Beyond did the study and this is what it came up with:

For me, discounts and coupons are definitely an incentive, but I’m usually already where I want to be and will passively check in wherever I am. What about you? Which services are you using, and how often do you use them?

The bean counters over at ABI Research are going out on a limb and predicting that by the close of...