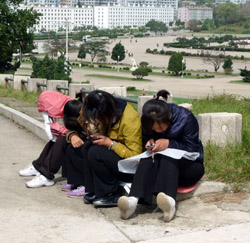 Just when we talked about a growing number of mobile phone users in North Korea, the government reacted… badly. Their plan is to confiscate mobile phones smuggled from China in an attempt to suppress news from the outside world, specifically news involving revolts against despots in the Arab world.

Unsurprisingly the North Korean government is using the old anti-capitalism rhetoric promising to punish “those spreading capitalist ideas and eroding socialism” while at the same time ensuring the life-long rule of Kim Jong-il.

Although there is no hard data on the number of mobile phones smuggled from China, it is said that more than 5,000 people in Hyesan alone had used such phones as of 2006.

So what do we make of it? We hate it and can only hope that the reign of communists in North Korea will end sooner rather than later.

The Pennsylvania Higher Education Assistance Agency (PHEAA) is allowing folks whose loans are serviced by its student loan servicing operations,...