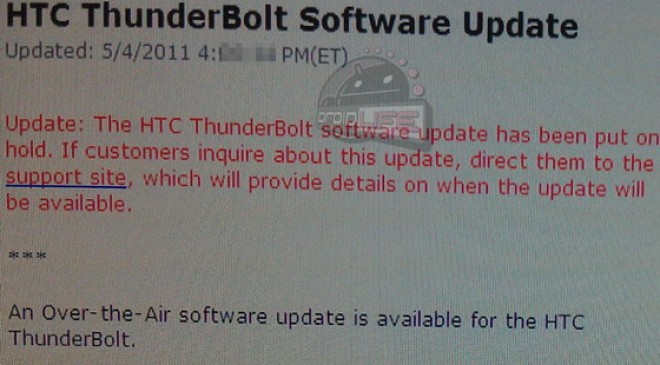 Remember that OTA update the HTC Thunderbolt was supposed to receive two days ago? Well, it looks like the update that would be addressing some issues with the handset has been delayed until further notice. We’re still not sure as to why the update has been delayed, but we’re sure Verizon must have some reasoning behind it.

The OTA that was supposed to hit this past Tuesday didn’t seem terribly big, and mostly contained bug fixes. It looked to enhance the connectivity of Verizon’s 3G network to the handset, fix bugs in the SMS/MMS client, improve stability for data-centric applications like Facebook, and improve GPS connections through Google Maps and VZ Navigator. While these issues shouldn’t go unaddressed, the Thunderbolt itself was supposedly delayed several times before it saw the light of day, so we can give Verizon a break for now.

If we’re lucky, Big Red is cooking up some more goodies for the upcoming update, making it worth the wait. Realistically, Verizon may have caught a bug last-minute, which happens, so it may be for the better.

Whatever the reasoning behind the delay is, it shouldn’t matter that much to the user. It’s not the update they are really waiting for.

Here at the BlackBerry World conference, RIM's Sweden team (better known as The Astonishing Tribe) has been very busy, not...