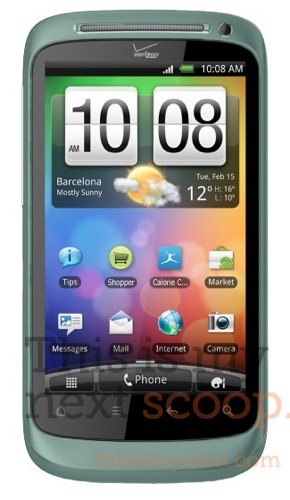 Handsets makers strongly believe in something called segmentation, meaning that they come up with a list of imaginary people who possess certain types of character traits that would make them want one handset in a vendor’s portfolio versus another. In other words, they stereotype, but instead of basing their conclusions on bigotry, they do it thanks to tons of research that include things like focus groups and surveys. With that thought planted in your mind, we present to you the HTC Bliss, an Android powered smartphone that’s supposedly going to launch on Verizon later this year that’s targeted to women in their 20s and 30s. According to This Is My Next, otherwise known as the old Engadget crew who left after giving their bosses at AOL the finger, the HTC Bliss will come in a greenish hue and be made out of soft plastic. It’ll feature a calorie counting application and a shopping comparison application, because you know, chicks like to stay fit and buy shoes. HTC is also planning to launch a matching Bluetooth headset for the Bliss, and a little charm that attaches to the corner of the device that lights up when you get a text message or have a missed call. The image above isn’t what the final device will look like, but sources say it’s a cross between the HTC Desire S and Desire Z, both of which we wouldn’t exactly use the words “pretty” when describing.

If you’re a woman then we’ve got to ask you: What do you think of all this? Should handset makers stop trying to peddle woman centric products at you or do you welcome the added attention to detail that they give these one off devices? Think of Nokia and the recently announced pink N8. It comes with a dedicated application to access ELLE Magazine. Does that offend you or does it actually make you want to pick it up?

Verizon Wireless' VZW PIX is obviously a success for the carrier as they decided to extend the service with the...