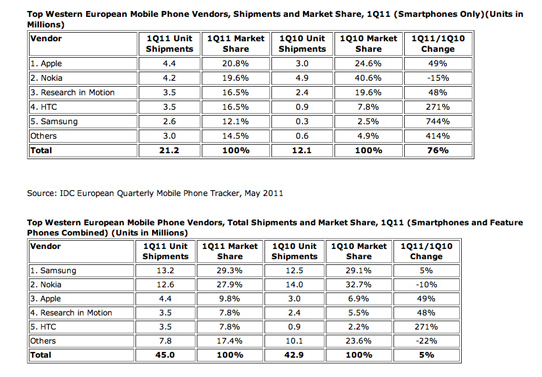 Apple is slowly-but-surely rising to greater heights worldwide as it just took Nokia for its top spot in smartphone market share in western Europe. The shift is significant because that is Nokia’s stomping grounds. If there is any name in mobile technology trusted and respected in that part of the world, it’s Nokia. However, without a smartphone that can compete with the iPhone, the Finnish company has slipped 40.6 percent market share in western Europe to just 19.6 in a single year. The iPhone also fell from 24.6 to 20.8, but that puts it just above Nokia’s numbers.

Additionally, other manufacturers are shipping more devices than ever before to Europe. According to IDC via Electronista:

RIM shipped more BlackBerry phones to Europe than before, 3.5 million, but the climb wasn’t enough to stop it from dropping to third place at 16.5 percent. Android’s rapid rise, meanwhile, helped HTC more than double its share and tie with RIM. Samsung’s Galaxy S almost single-handedly helped catapult the company from just 2.5 percent of European smartphones last year to 12.1 percent in early 2011.

Nokia’s hope against the onslaught of BlackBerry devices, Android and the iPhone might have to come in the form of new Windows Phone 7 devices. With Microsoft’s backing, Nokia could regain some of its lost market share. And also with Windows Phone 7, perhaps the smartphone maker can start making a dent in the U.S. market, the market where it has really had no presence at all the past five years.

Tegra 2-optimized games are not as plentiful as we would like to see at the moment, but we're assured that...