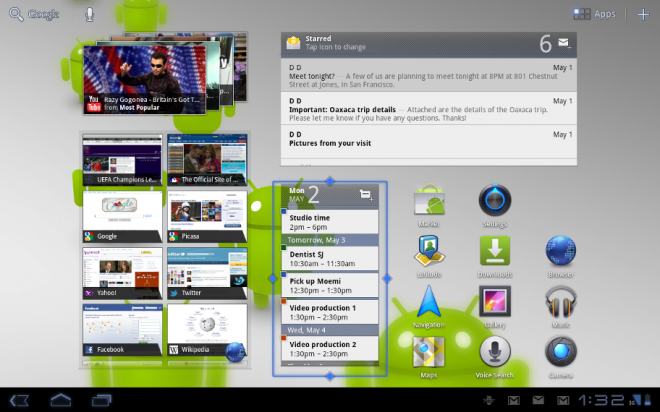 Google has just announced Android 3.1, an update to the Honeycomb tablet OS that was first seen with the Motorola Xoom, and guess which device is getting it first? It only makes sense that the Xoom will, so other Honeycomb users will have to sit and wait until Google announces the availability of the new software for their devices.

Meanwhile, Android 3.1 brings a ton of new features and updates, along with new development tools:

Additionally, the UI has been cleaned up a bit – something which had been a problem for some users when Honeycomb made its debut on the Xoom. Many UI elements weren’t very clean or intuitive, so hopefully those issues have been resolved. Transitions and animations are said to be faster and smoother, so the overall user experience should be a step above version 3.0.

Android 3.1 also brings support for a number of USB peripherals such as keyboards and game controllers. Pretty nifty!

The new features in 3.1 are quite vast, so for additional details, be sure to visit the Android Developer site linked below.

The Google Music service went live this morning at the Google I/O conference in San Francisco and it's currently in...