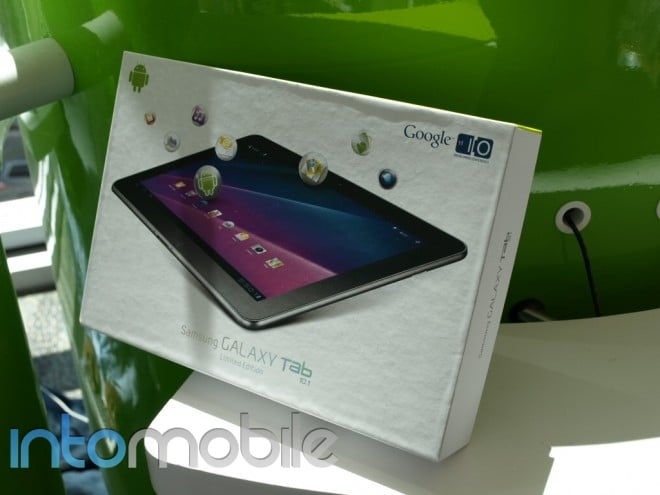 In case you missed it, Google just handed out free Galaxy Tab 10.1 Limited Edition Android Honeycomb tablets to all five thousand or so attendees of its Google I/O 2011 conference. While the rest of the world has to wait to put their own fingerprints all over the shiny new tablet, we’re lucky enough to go hands-on with the most impressive Honeycomb tablet we’ve come across to date.

The Galaxy Tab 10.1 is thinner and lighter in weight than the iPad 2. That’s no easy feat. Thanks to some ingenius re-engineering by Samsung’s tablet boffins, the Tab 10.1 packs a serious dual-core NVIDIA Tegra 2 processor and two cameras into a package that’s both solid and sturdy in the hand as well as light and nimble. The tablet runs Android 3.0 Honeycomb OS and should be updated to Android 3.1 OS in the coming weeks.

The Limited Edition version of the tablet – the version that was given out to all I/O 2011 attendees – sports a glossy, white paint job. The backside is adorned with cute little Android graphics. The packaging also sports a “Google I/O 2011” logo, which makes these particular tablets just that much more exclusive.

Judging by the heavy use of lightweight plastics, you’d initially expect the tablet to feel cheap and somewhat less “premium” than the iPad. That isn’t necessarily the case. While it can’t match the in-hand feel of the iPad 2’s aluminum unibody chassis/casing, the Tab 10.1 feels every bit as solid. It’s no doubt a premium product.

We have yet to put the Tab 10.1 fully through its paces, and battery life is a big concern. Expect to see a full review of the Tab 10.1 Limited Edition from us in the near future. For the time being, enjoy the hands-on photo gallery and video below!