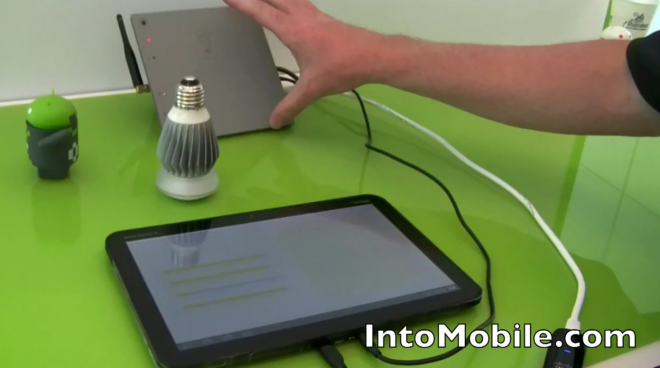 The Android@Home announcement yesterday was an incredibly ambitious plan to have the little, green robot to integrate and control nearly everything in your house. The company demonstrated this with lightbulbs from Lighting Science and we were able to get a closer look at this at the Google I/O conference.

The Android@Home framework requires a new wireless protocol technology inside the devices it can control and Google isn’t yet describing what this is other than saying it will be low bandwidth and low power. The folks at Lighting Science didn’t tip its hand either, as it just said that the lightbulbs it will sell by the end of the year will have this technology baked in and it won’t be prohibitively expensive. This will allow you to eventually use Android smartphones or tablets to turn your light on and off, dim lights or even have these scheduled to sense your device as you walk it and automatically turn on lights.

The only issue is that it’s not going to be as simple as buying the Lighting Science bulbs and placing them in your existing lamps and light fixtures. You’ll have to have a wireless “bridge” set up in your house for this to work in order for the unnamed wireless protocol to work. That added level of complexity could make the Android@Home framework a tough sell at first, as we all know how flaky wireless networks can be.

I’m still quite bullish on this technology though and I believe that this could be a nice counter to AirPlay when you bake it into multimedia devices like speakers. We saw a demonstrations which used a tablet to throw music to separate speakers and this could give Android accessories Sonos-like abilities out of the gate.