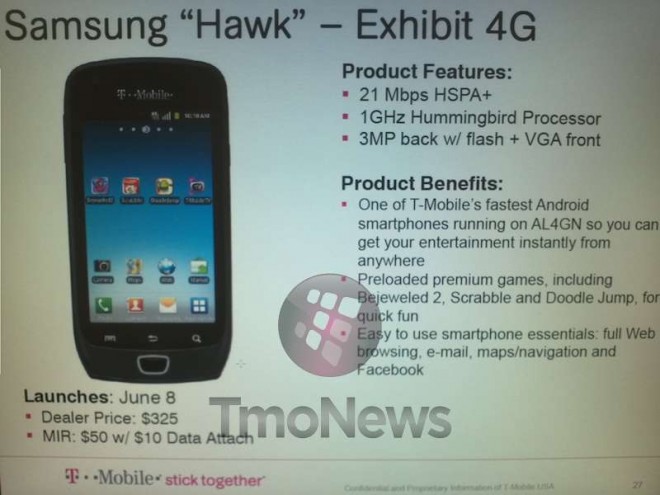 It looks like the HTC Sensation won’t be the only handset to debut on T-Mobile USA on June 8th, as we just got word that two new Samsung Android phones will round out the release. Neither handset will be stealing the show from the Sensation, but you will have two more choices in T-Mobile’s Android phone selection.

The Exhibit 4G will sport a 3.7 inch display, along with a 1GHz Hummingbird processor, 3 megapixel camera with LED flash, and a front-facing VGA camera for video chat. The Exhibit 4G will also be running on Android 2.3.3, which is great to see on a handset of this caliber. As you can tell, the handset isn’t attempting to compete with the Sensation, or even the G2X, but it will give users a cheaper, yet still very capable option. Surprisingly, the handset will support T-Mobile’s HSPA+ network, with support for 21Mbps.

The Exhibit 4G will run you $325 off contract, and will come with a $50 mail-in rebate. After subsidies and the MIR, the Exhibit could go as low as $100 on contract.

Next up is the Samsung Smart, a mid-range device that will be a part of T-Mobile’s Gravity line. The handset should be an ideal choice for first-time smartphone users, or those on a budget. Shipping with a 3.2 inch display, 800MHz processor, 3 megapixel camera with LED flash, and Android 2.2, the Samsung Smart isn’t for the spec-junkies out there, but should still find a good amount buyers.

Retail pricing for the Smart will be $225 off contract, and it too comes with a $50 mail-in rebate. After all is said and done, you may be able to grab the Smart for $50-$75 on a new contract.

The Exhibit 4G or the Smart won’t be swaying anyone from purchasing the HTC Sensation, which will land on the same day, but both offerings are a welcomed addition to the carrier’s Android line up. 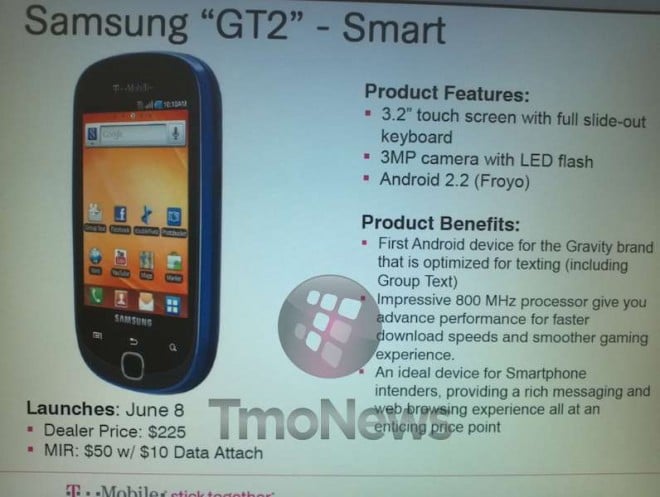