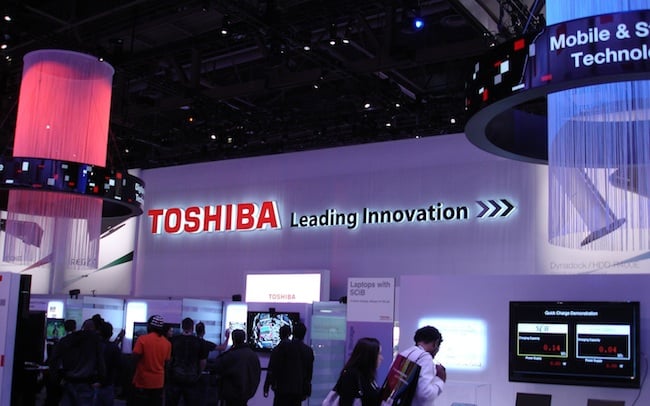 Earlier this week we wrote about Samsung’s new 10.1 inch 2560 x 1600 pixel resolution screen and while it got us pretty excited about how much sharper future tablets are going to be, what we were really waiting for was Toshiba’s announcement of a new 4 inch screen that does full 1280 x 720 pixels, otherwise known as 720p HD. That’s an astonishing 367 pixels per inch compared to the already delicious 326 pixels per inch on the iPhone 4. Not stopping there, Toshiba also has a 3.3 inch screen with a resolution of 864 x 480 pixels, meaning handset makers are likely to start making smaller smartphones after spending the past few years trying to make the bulge in our pockets as large and annoying as possible. These two new displays use Low Temperature Poly-Silicon technology which enables them to have a 1,500:1 contrast ratio, the ability to display 92% of the colors in the NTSC color gamut, and viewing angels of 176 degrees both horizontally and vertically.

Now for the important question: When are you going to see these displays used in smartphones available at the electronics store around your neighborhood? Toshiba unfortunately fails to mention when they’ll begin mass producing these screens or when they’ll start shipping samples to handset vendors. It’s likely that’s what was announced today was nothing more than a technical demonstration and is at least a few years away. This wouldn’t be the first time we’ve been cock teased like this. Back in February of this year Hitachi announced that they made a 4.5 inch display that does the same 720p resolution as Toshiba’s new screen. It’s yet to land inside any mobile product we’ve heard about.

Don’t be dismayed though. While Google has made Ice Cream Sandwich official, they’ve yet to announce any of the technical features it’ll have onboard. Chances are support for high resolution screens is coming, and we’ve already seen a handful of 960 x 540 Android smartphones either announced or leaked from HTC and Motorola.

Toshiba is taking its Android tablet plans very seriously - and the few we've seen so far aren't half bad...