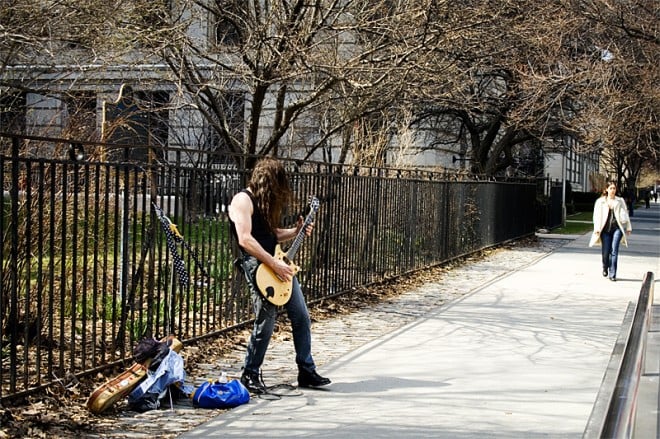 Until three days ago, I was a paying subscriber to Pandora but there has been an explosion of innovation in the mobile music space, so I thought it would be a fun time to explore my options and hear some feedback from all of you.

I don’t actually listen to as much music as I used to, as podcasts and audiobooks now make up most of my listening time. Still, there are many occasions when I just want to rock out at my house or on the go.

My criteria is pretty simple: I’m willing to pay for music but I don’t need to own it. The service must be cross-platform (iOS and Android), as well as have a web component. Offline caching is definitely nice but not a requirement and I would like it to integrate with Sonos but I’m not too concerned about that because that company is integrating with new services all the time.

I’m also kind of cheap, so the idea of paying $10 a month is still kind of iffy but I can do it if the service proves to be valuable. I definitely listen to enough music to warrant it as I’m always rocking out while on public transportation, at the gym and in the shower. If you think that last one is weird, you’re wrong. Music is the best thing to happen to the shower since shampoo.

Additionally, I’m not much of an audiophile, so I don’t care about what bitrate the tunes are coming in. Most of the time, I’m listening through ear buds anyways.

Let’s look at the contenders. 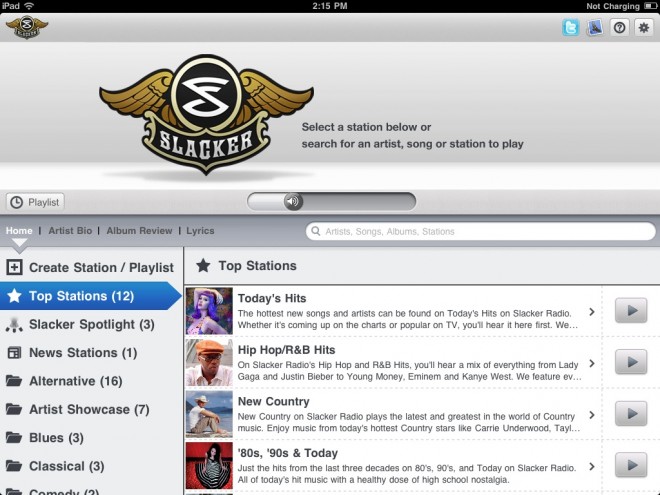 Slacker Radio has been around for a while and the company just announced a new subscription option for $10 a month which gives you unlimited on-demand mobile music for the music and artists of your choice. This is in addition to its Pandora-like ability to offer free Internet radio based on your tastes.

The new option makes Slacker much more appealing to me, as you still have the ability to discover new artists with the Internet radio and you can now get exactly what you want, when you want it.

There are also multiple subscription options, as you can pay just $4 a month to get unlimited skips, no ads, as well as song lyrics. The service also has many spoken word channels like comedy and news radio.

You can also use Slacker to cache stations and tracks for offline access and this could come in handy in many occasions.

Like all of these services, you may not find the exact band or artist you want due to licensing issues. The Slacker collection is pretty extensive but there are a few holes.

The unlimited on-demand music is cool but $10 a month can add up quickly. Luckily, it does have the multiple tiers. I’m also not in love with the interfaces of the mobile apps but it’s more than usable. 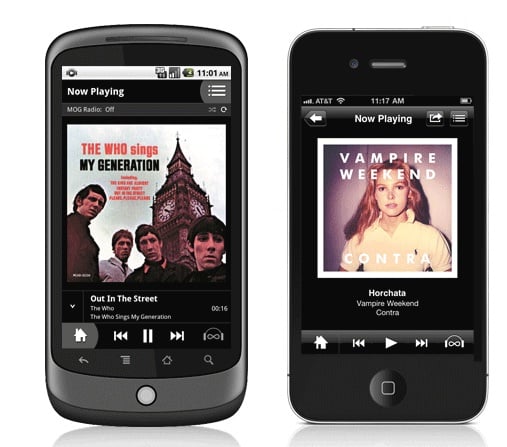 Mog has many of the same features as the other services but this one really shines with the user experience. It’s simply a blast to use Mog to listen to tunes.

The collection of tracks is great (although there are some missing), the layout on the web and on the apps is fantastic and there are social discovery options that will help you find new things to listen to. The apps let you stream songs and playlists, as well as download these to the device for offline access. The quality of the music is also better than some of the other services.

My only beef with Mog is that I’m not quite ready to pull the trigger on the Primo subscription plan for $10 a month. There is a $5 monthly plan too but this won’t let you download the tracks to your device. Still, this is definitely one I’m highly considering. 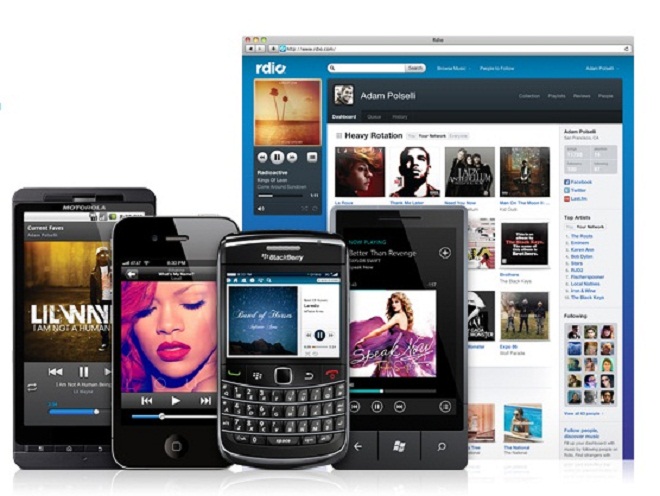 The Rdio service has been gaining a lot of buzz recently because it adds a fun social layer to the music experience. This service offers streaming, on-demand tracks and playlists and it will even let you check your home collection against its database to see what songs it can give you access to on the go.

The interface is really nice with the mobile apps and online and you can create profiles or follow others for new tracks. While Mog also offers profile stuff, I’ve found the Rdio implementation to be a bit better.

Again, the $10 monthly price tag can start to add up and sometimes I don’t really want my music to be social. If I get the Bieber Fever, I don’t need the world to know about it.

While all of these streaming services will put a hurt on your battery life, I’ve found that Rdio does an especially good job of pummeling my phone’s battery. 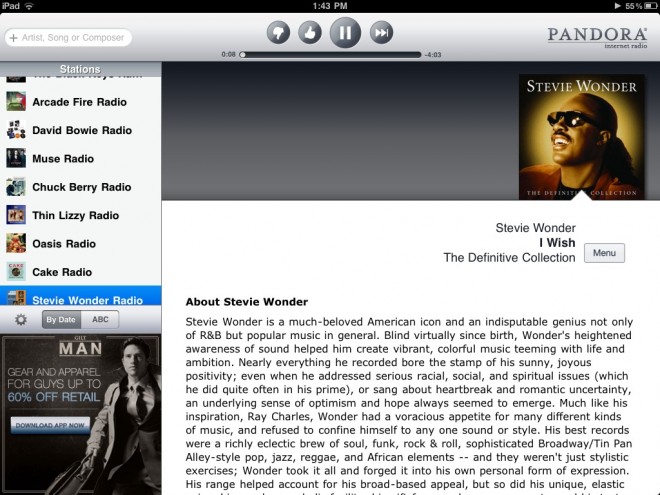 Pros
There’s a reason Pandora is so popular and will be going public soon: it’s a great way to listen to and discover new music. I’m kind of stuck in my ways with many types of music (Can you believe the state of current rap? Give me some Big L, Wu-Tang and early 90s West Coast rap and I’ll be a happy man), so there is some lovely serendipity of finding new artists and songs with this service.

Pandora is simple: You put in the name of an artist or track and it plays songs that are similar using the Music Genome Project. You have a limited number of skips if you don’t like what’s going on.

Pandora is also pretty darn ubiquitous, as you can find it on Android, iPhone, in some cars and it works well with Sonos. The apps also all look pretty good (the iPad version rocks) and are easy to use.

It’s actually kind of cheap too, as a one-year subscription will cost $36 and this includes more skips and no audio ads.

While the subscription may be relatively cheap, I only purchased it because I had thought it meant unlimited skips. Boy was I wrong.

The music discovery serendipity is also awesome but sometimes I just want to listen to a specific track or just one band. It’s also SOL if you don’t have a connection, like if you’re on a plane without WiFi. 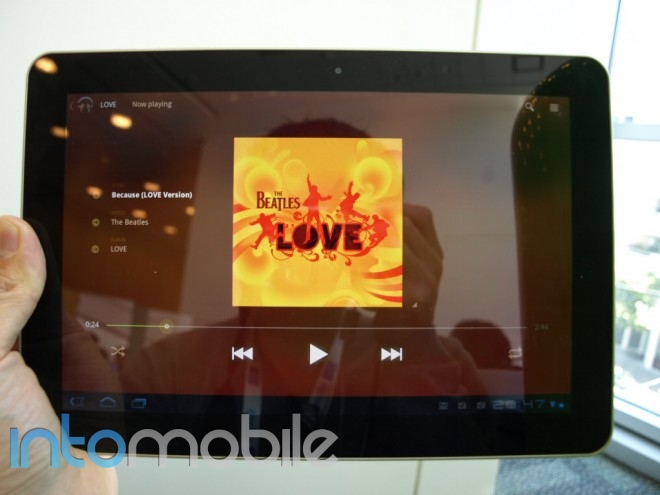 I was lucky enough to be included in the Google Music Beta and I’m strongly considering this as my main way to listen to tunes. The service lets you upload 20,000 tracks to a Google server and you can then stream or cache these tunes to your Android device or computer.

As you can see from our hands-on time, the Google Music Beta delivers on what it promises. The tracks play with relatively little buffering and you have the option to upload your playlists or create new ones through the web interface.

It’s an awesome feature for Android and it’s free, at least in the beta form.

The service is only available for the web and Android and that’s only if you were lucky enough to attend Google I/O. Google doesn’t appear to want to bring this to iOS or other platforms. I was able to get the service up on the iOS browser but you couldn’t hear the audio (likely because it’s Flash-based) 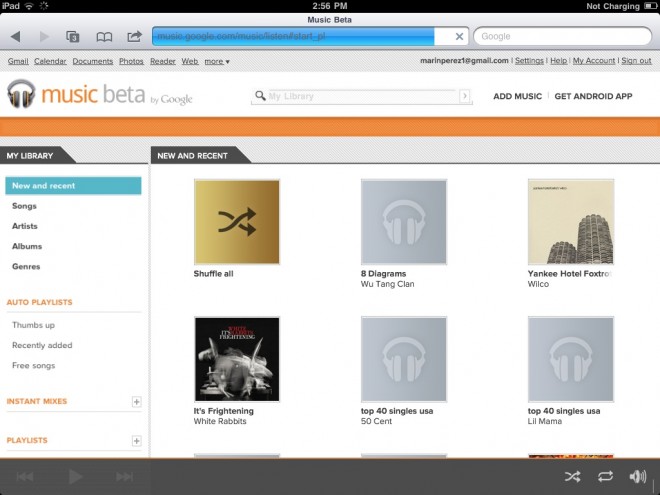 The upload process takes f-o-r-e-v-e-r, even on a fast collection. That’s not too bad though when you consider how much of your library you can upload. The Music Beta service also doesn’t offer ways to buy new tracks directly or ways to really discover new artists. 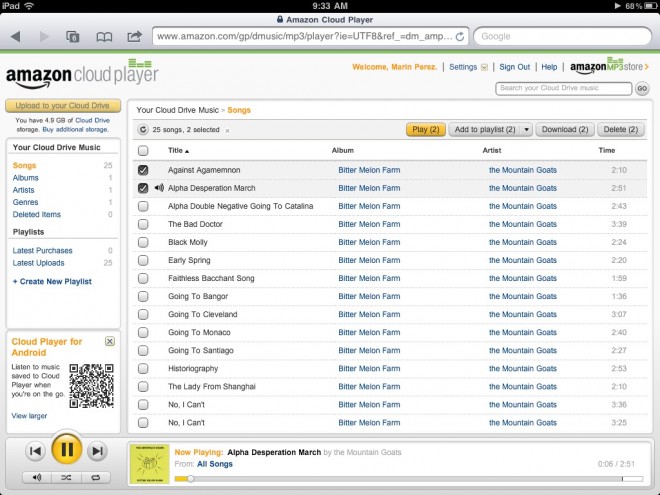 The Amazon Cloud Player is similar to Google Music Beta but it has the added benefit of offering the ability to buy tunes and albums directly from Amazon.

You get 5 GB of online storage space for free with Amazon and that’s quickly bumped up to 20 GB when you purchase an album. The Amazon Cloud Player will let you stream tracks and albums to your devices and you can even re-download these to other computers and phones.

The Android app offers a nice interface that’s easy to use and purchasing music is simple and easy, as long as you already have an Amazon account.

While the Amazon Cloud Player now works with iOS, the in-browser experience isn’t as good as a standalone app. Additionally, the Google Music Beta potentially gives you more storage space for free and you have to continue to pay for your Amazon cloud locker.

What should I rock out to?

There are multiple other options out there like Rhapsody but I think I’ve hit the main ones. Right now, I’m leaning toward using the Slacker Radio mid-tier subscription while also using Music Beta and Amazon to back it up.

Android does Windows Phone 7 the right way with Infobar

We've seen some pretty interesting custom user interfaces for Android before, but the latest skin from Japan’s KDDI Infobar handset...