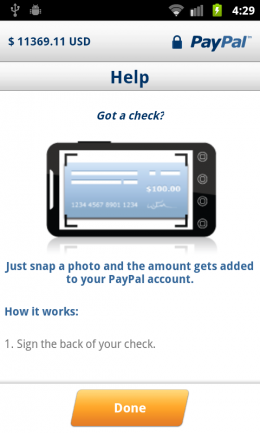 The PayPal Android app has been pretty handy to keep track of your account but the app is now receiving an update to keep it on par with its iPhone rival: the ability to snap a picture of a check and have that deposited into your account.

We first saw this feature for the iPhone late last year and it’s good to see the Android PayPal app get it, even if it’s six months later. Don’t worry Android fans, as the PayPal team promises that it will be trying to keep the versions on par in terms of features.

The ability to add money from checks was added to the PayPal app for iPhone back in October of 2010, and it’s been a big hit. On average, about a million dollars per month have been uploaded since we launched mobile check capture on the iPhone. That’s a lot of people skipping the ATM, depositing a check with their phone and not paying any fees for the privilege. Reading through your comments from our iPhone Announcement, I see “Android, Android, Android, Android.” It’s true, new features often come out on the iPhone first, but that’s only because the iPhone has been around longer. Rest assured, new PayPal features for Android won’t be far behind!

This is just the latest update to add additional features to the PayPal Android app, as the service also recently added Bump integration and the company will continue to improve.

The program is free, so try it today.

The Samsung Infuse 4G for AT&T embodies the three directions that mobile phones seem to be headed - larger screen...