The Samsung Infuse 4G for AT&T embodies the three directions that mobile phones seem to be headed – larger screen sizes, thinner bodies and more powerful processors. That’s right – the Infuse 4G manages to wrangle all three, and in a very usable package. Its 4.5-inch Super AMOLED Plus display is rich and vivid, though its size is not entirely unwieldy (sometimes it can be). Its body is impossibly thin, yet its proportions don’t suffer as a result of it. And given its peppy 1.2GHz processor, the battery manages to work throughout the day until you’re about ready to hit the sack.

Couple the hardware package with the capable Android 2.2 Froyo software and Samsung’s easy-to-use TouchWiz user interface and you’ve got a winner. Wanna know about the rest? Read on!

Available from AT&T for $199 with a new, two-year contract 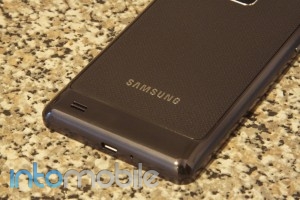 The Samsung Infuse 4G is a beast of a phone. When 4-inch and 4.3-inch touchscreens first seeped into the market, it seemed to draw very polar criticisms – some folks loved them, and some just plain hated them. I suspect that the Infuse 4G will do the same, although chatter has led me to believe that many are loving the size of the screen. Just beneath it are your typical Android touch-sensitive buttons: menu, home, back and search keys. Above the screen to the left of the earpiece is the ambient light sensor and a 1.3-megapixel front-facing camera for video calling and self-portraits.

Around the edges of the phone you’ll find the power/standby button, placed to the upper right just like the Galaxy S devices. While it was awkward with previous models, the beastly size of this phone makes it ideal – you don’t have to stretch all the way to the top to reach it, just wrap your hand around the side. On the left side you have the volume rocker, and on top of the phone there is a tiny little microphone for noise cancellation right next to the 3.5mm headset jack. The microUSB charging port is located down at the bottom next to the microphone. The speaker can be found on the back of the phone right along the lower lip; it’s that lip that makes the phone seem thicker than it is when lying flat on its back. Up top on the back side is the 8-megapixel camera with an LED flash, right smack in the center.

While the phone makes heavy use of plastics, typical of Samsung smartphones, the back is textured in such a way that makes it feel less cheap, for a lack of a better term. Oddly, I don’t find that it improves grip of the phone at all, and it still tends to get a bit slippery.

No real surprises here as this thing has Android 2.2 Froyo packed under the hood, and we have Samsung’s TouchWiz 3.0 UI layered right on top of it all, for better or worse. The UI isn’t nearly as intrusive as other custom interfaces, and I find that it actually makes Android a little prettier and easier to navigate. You have seven home screens which you can customize, and jumping from screen to screen is easy with the pinch gesture. You just pinch the screen anywhere on one of the seven panes, and you can pick and choose which one to jump to. It’s much like HTC’s Sense UI, and it’s great for navigation. The icon list is also more uniform, like the iPhone, and they swipe left to right instead of up and down. Some folks might find that a little more pleasing or intuitive.

Another nifty inclusion is the control panel in the Android notification bar. When you pull the bar down, you’ll have the option to toggle Wi-Fi, Bluetooth, GPS, Silent Mode and Screen Rotation. I think it’d be great if all Android devices had this feature included.

This is possibly the first Android device I’ve ever used where I haven’t had a single hang-up or instance of lag. It’s odd to come to this realization, as some Android apps and background processes can really hog up resources, but the 1.2GHz Cortex A8 Hummingbird processor makes sure the software hums along smoothly. Swiping or switching screen is flawless, opening and using apps gives no trouble whatsoever and everything in between is just a pleasure.

Because this is the Infuse 4G, I think it’s worthwhile to put the name to the test. Out of 5 tests, I averaged 1.4Mbps down and 480Kbps up. At the same exact location in New York City, side-by-side (but not at the same time), I was averaging 3.9Mbps down and 1.6Mbps up on my iPhone. I’ll leave judgment up to you, the reader.

I’ll leave these photos here for your benchmark tests. Quadrant is 1073 if it’s too small to read. 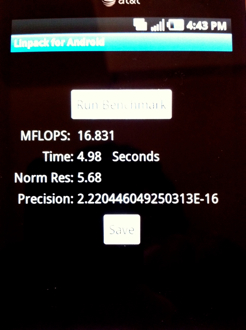 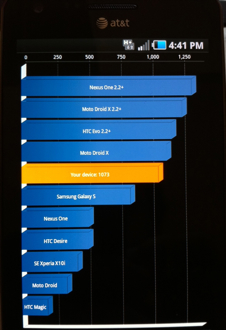 It’s your typical Android web browser, which is a Webkit browser, so you can expect to see most pages as you would on a desktop-class browser. Pages loaded very smoothly, and the choppiness I’ve grown accustomed to when scrolling while pages load was noticeably absent. Because this is a Froyo device, you’ll also have the ability to use Adobe Flash. Perhaps Flash-heavy pages were the only ones that gave me any real problems in terms of lag, but otherwise it worked just fine.

The Infuse 4G packs an 8-megapixel camera, and while megapixels don’t make up the entire story for quality photos, this device doesn’t disappoint. Colors looked pretty natural, and its ability to capture details from afar is admirable. With eight megapixels to play with, if you take a photo that wasn’t composed properly, you can crop it later without worrying too much about quality degradation. I just wouldn’t go and use 100% crops.

The camera software could be better, and there is a considerable amount of time between activating the shutter and actually taking the photo – a problem that has plagued many older phones. But if getting that spur-of-the-moment photo isn’t an issue, it’s not too bad. It has touch-to-focus, which is nice, and offers a number of light metering modes, too. You can also shoot black-and-white photos and other types of photos from within the camera, as well as adjust white balance and more. These are some of the things I wish the iPhone would offer.

Additionally, the Infuse 4G records 720p videos, so when you’re sharing some of the videos you shot with friends and family over YouTube, or perhaps on your big screen TV, you know that the quality is going to be fair. 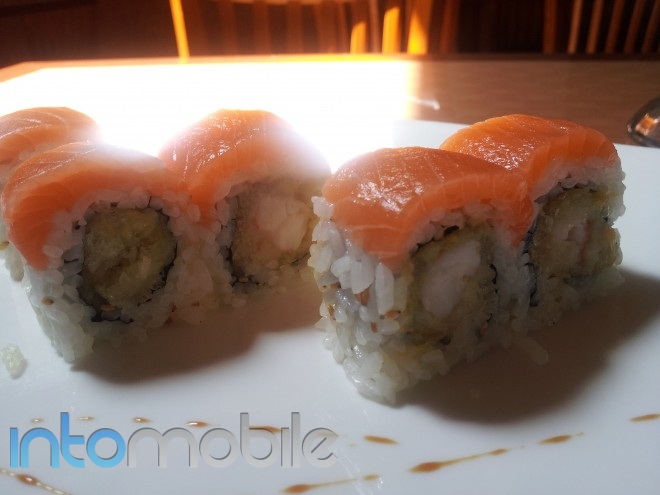 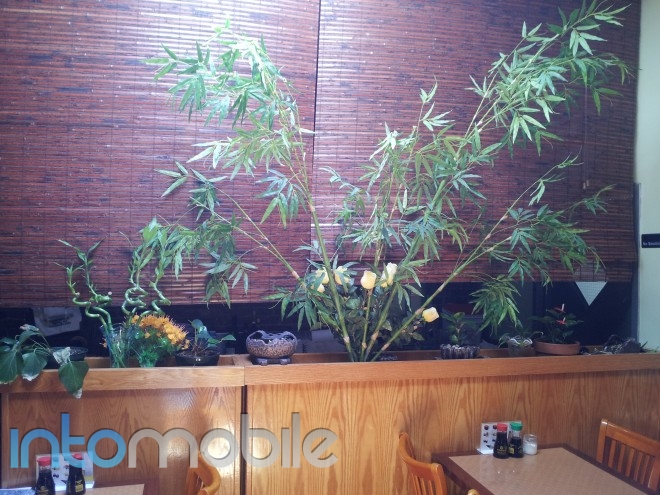 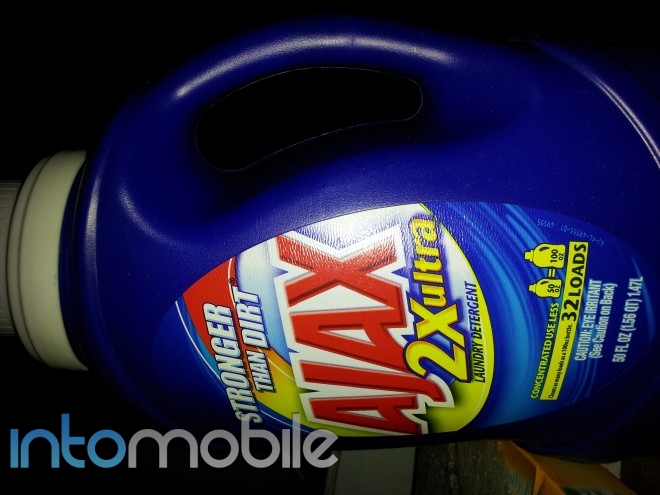 I’m not the biggest fan of Android’s multimedia offerings, so I’m just going to get that out of the way. However, the Infuse 4G wins me over because of its very large screen and Samsung’s Media Hub. When you purchase the Infuse 4G, you’ll get an activation code for $25 worth of credit in Media Hub, courtesy of Samsung. You can get movies, games and other goodies in the store to get you acclimated to Media Hub, and you’ll get to enjoy some entertainment, too.

The photo and video gallery is just like the Galaxy S devices before it, pretty typical of Android, where you can swipe around to view your photos and organize them into albums, too. The music player is intuitive and allows you to select all songs, playlists, albums, artists or by genres. Samsung also takes advantage of its brilliant Super AMOLED Plus display here by adding some color to the music player, which gives it a little bit of visual pop. 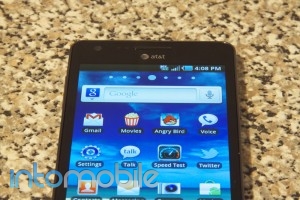 Call quality on the Infuse 4G was decent, but not great. In many instances, my callers sounded a bit robotic and it was high on the treble. Most of the time, however, I could understand them without any issues. The speakerphone was loud and clear, though a bit tinny, but it gets the job done. Overall, call quality on this phone, in my experience, isn’t the greatest, but it’s not so bad that you can’t carry a conversation.

The primary concern on a device with this much horsepower and a screen so big is battery life. I came away thoroughly impressed. I’ve had this thing for nearly two weeks, and with moderate use, I’ve only had to charge it every day or two. With heavier use, I’d need to charge it by the end of the night, but the bottom line is this thing should last just fine from the time you leave your house in the morning until you get home from work.

The Samsung Infuse 4G is arguably the best Android device you can get for AT&T right now. Its raw processing power, enormous and vivid screen and capable camera really blew me away. Now, it’s not like I sat here and said, “Wow,” every time I did something with the phone. But it was the fact that I never found myself cursing it – either for performance or ease-of-use – that leaves me wanting this phone. When I can get through an entire day without being troubled or hassled by an Android device, and it does everything I want it to do without a hiccup, that’s when I know it’s a great Android phone. The Infuse 4G is a great Android phone.

TuneWiki, an excellent social music player that has seen a couple of hardware preloads, has updated their Android app with...