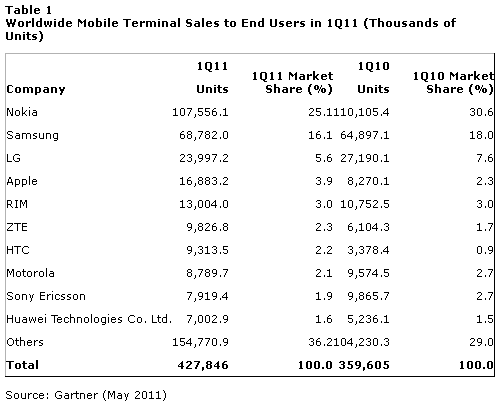 Gartner has posted their report for the first quarter of 2011, which shows predictably solid growth in smartphones, and re-establishes many trends we’ve been seeing all along. Nokia’s hardware market share has dipped to 25%, Samsung is down to 16%, and LG to 5.6%. That leaves Apple with 3.9% market share (up from 2.3% last year), RIM with 3% (identical to last year), HTC with 2.2%, Motorola with 2.1%, and Sony Ericsson with 1.9%. In terms of worldwide OS market share growth, Android is leading the way with 36% of all units sold, followed-up by Symbian with 27%, iOS 16.8%, BlackBerry with 13%, and Windows Phone with 3.6%.

Gartner is optimistic for Android, forecasting that it will have half of the pie by the end of 2012, and seeing these numbers, it’s hard to argue with that conclusion. Although Apple ended up selling twice as many iOS devices (including iPhone, iPad, and iPod touch), their market share only increased 1.5% globally, while Android’s nearly quadrupled. It’s sad to see RIM’s device market share stay flat, and operating system market share dip from 19.7% to 12.9%, but not entirely unexpected. QNX on smartphones is still a ways off, and in the interim, I don’t see OS 7 doing much more than placating the BlackBerry loyal. Obviously Windows Phone has a bright future ahead of it with the help of Nokia, but for the time being, Microsoft’s new mobile platform has only managed to eke ahead of webOS.

Millennial Media has just released its Mobile Mix report for April 2011 and as you'd expect, Apple and Google are...