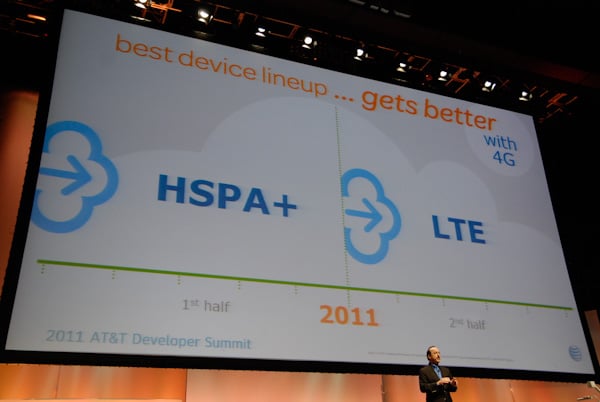 During a visit to AT&T’s Foundry Space in Plano, Texas, Stacey Higginbotham, a writer for GigaOM, asked if she could get a demo of the soon to launch 4G LTE network and the engineers were more than happy to let her run some speed tests. The numbers she got: 28.87 Mbps down and 10.4 Mbps up. Now you have to remember, she was likely the only person attached to the one cell tower on the property that’s being used for testing. That being said, those are some impressive figures, especially compared to Verizon’s 4G LTE network which launched in December, already has around half a million users, and is often benchmarked at delivering roughly 15 Mbps down and 5 Mbps up. What will make or break AT&T’s network is how they’re going to price their data and what sort of devices they plan on offering.

Speaking of devices, earlier this month we’ve managed to score some intel on 3 of upcoming pieces of gear that will be compatible with AT&T’s LTE network. There’s the 10 inch Android tablet made by HTC, currently known as “Puccini”, and then two HTC smartphones, both with a dual core 1.2 GHz Qualcomm Snapdragon, one with a 4.3 inch screen, known as the Lead, and the other with a 4.5 inch screen, known as the Holiday. If the rumors we’ve been hearing pan out, then by the end of next month AT&T’s LTE network should go live.

One thing that upsets us, and Stecey too, is why America’s LTE networks don’t stack up to what’s available in Europe and Asia. In those territories operators offer up to 100 Mbps speeds, maxing out what the standard is capable of, yet the only operator on this side of the pond we’ve seen being able to offer those type of stats is, ironically, Clearwire, who today runs a WiMAX network, but is likely soon to announce a switch to LTE.

Last year a new joint venture called Isis was created by AT&T, Verizon, and T-Mobile with the goal of setting...