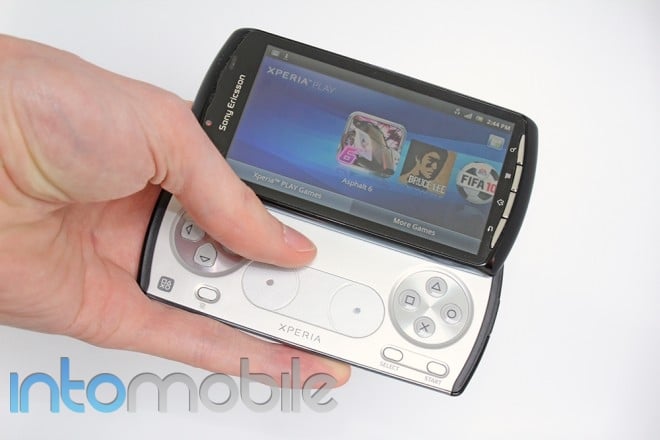 The Sony Ericsson Xperia Play is launching on Verizon next week, bringing classic portable gaming to smartphones. I just got the Rogers model this afternoon, and it’s been hard to stop my day from evaporating into a haze of video games. The Play, as you may know, has a 4-inch 854 x 480 display, a 5 megapixel camera on the back, plus front-facing VGA camera, runs on a 1 GHz Snapdragon processor, 512 MB of RAM, and is based on Android 2.3 Gingerbread with some tasteful Sony Ericsson customizations.

Being of the same generation as the Xperia Arc, there are a lot of similarities both on the hardware and software side. Timescape runs just as smoothly, both as a home screen widget and an app in itself. There are still lots of cool effects for throwing out widgets, and zooming out to see all of your home screens at once. One difference is that the Xperia Play has a hardware search key, which is something I would have liked on the Arc.

I’ve only had a few hours to try out the games, and I’m still getting used to the dual joysticks. I’m not sold on them being primary inputs, but as secondary options to the physical directional pad, it’s a nice option. Games on the Xperia Play are actually pretty big, regularly counting several hundred MB in size. It was a bit of a squeeze to get the new games onto my already-cramped 16 GB card, but the unit itself came with seven titles on the pre-installed 8 GB microSD.

There are already a few surprises I’ve experienced with the Play that I didn’t catch with in my time with the Arc. For one, the PC companion is really smooth. Windows recognizes the Play as a portable device, and the desktop app creates a virtual mounted drive for transfering media and syncing contacts (not that you need to with everything in the cloud). Under the hood, the microSD card slot and the SIM card were very easily accessible; though I doubt I’ll be hot-swapping SIM cards with any regularity, once the Xperia Play’s game market expands, I could see myself needing to carry around a separate card just for games.

Anyway, we’ll have a full review coming soon, well before the Verizon launch next week. Stick around! Our video’s still in the works, but we’ve got some from CTIA over here and GDC here. Already sold? You can pre-order online starting today for $199 on a two-year contract.

Update: Finally finished up with the hands on video… Check it out after the gallery!

During a visit to AT&T's Foundry Space in Plano, Texas, Stacey Higginbotham, a writer for GigaOM, asked if she could...