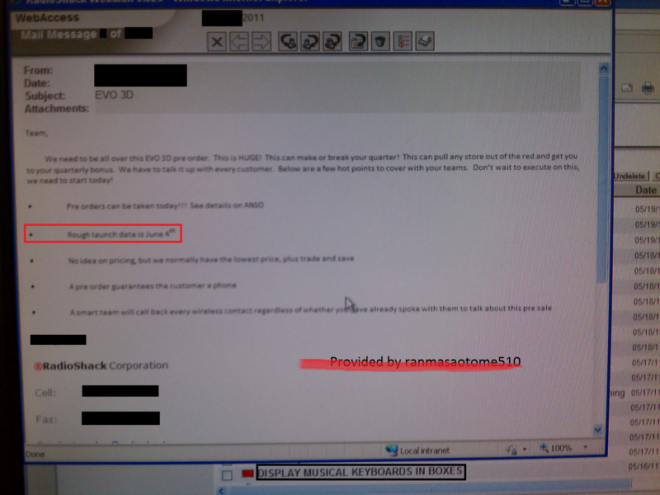 We already had a pretty good feeling that the HTC EVO 3D would be landing on Sprint soon, and now a leaked RadioShack internal memo has revealed that they’re aiming for a June 4 launch day.

The EVO 3D, as the name suggests, is one of the first smartphones to offer stereoscopic twin cameras (5 megapixels each), so you can shoot stills and video that virtually pop out at you. The screen is specially-built to display this and other 3D content without glasses. The quality is hard to describe without trying it out for yourself, but if you’ve spend any time with the Nintendo 3DS, you’ll have a good idea of what to expect. That somewhat gimmicky feature aside, the HTC EVO 3D is respectable hardware, thanks to a 1.2 GHz Snapdragon processor, high-speed wireless data over WiMAX, a 4.3-inch 960 x 540 display, and running Android 2.3 Gingerbread. Take a look at our hands-on video with the HTC EVO 3D from CTIA over here.

The EVO 3D promises to be a unique smartphone if nothing else, and with AT&T and T-Mobile progressing towards a merger, Sprint will need all the help it can get to prevent being stuck in last place among U.S. service providers. We’ll keep an eye out for an official announcement about availability, and with June 4 just around the corner, it wouldn’t be surprising to see one soon.

The Sony Ericsson Xperia Play is launching on Verizon next week, bringing classic portable gaming to smartphones. I just got...