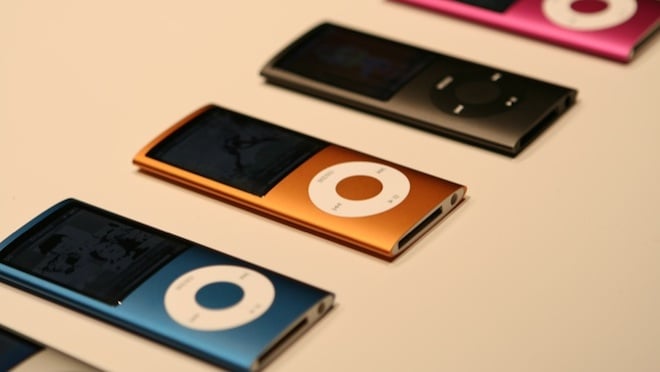 Taiwanese rumor site DigiTimes, who has a track record that’s been surprisingly accurate, minus a few incredibly wrong predictions, is saying that the next iPhone will have a curved glass display. They say Apple has gone ahead and purchased 200 to 300 glass cutting machines and that once the Cupertino company achieves satisfactory yields, said machines will be turned on and production will kick off. If we had to take a guess as to what kind of curved display Apple is thinking of implementing, we’d say it’s something similar to the 4th generation iPod nano, pictured above. That would mean that the next iPhone, whether it’s actually called iPhone 5 or iPhone 4S we’re not really sure, will receive a significant redesign. That doesn’t jive well with what we’ve been hearing. According to the hubbub that’s been floating around the net, the next Jesus Phone will look very much like the model that’s out right now, except that it’ll have a slightly larger screen and the faster A5 processor (right now found only in the iPad 2) inside.

We’ll find out soon enough if DigiTimes is right or if they’ve been mislead. In 2 weeks Apple is set to host their annual Worldwide Developers Conference where it’s been confirmed that they’re going to show off the next version of iOS and Mac OS X. It’d be nice of them to also show off the next iPhone at WWDC, but it’s probably not going to happen and instead it’ll be shown off at a dedicated event at some point before September.

Back to curved glass, the only handset we can think of that has such a display is the Samsung Nexus S, but the curvature is so subtle that you can’t really tell it’s there. Apple is a materials expert after all, so we’re curious to see what they’re capable of doing to keep their design fresh.

Motorola Droid 3 confirmed to have a 4-inch screen, dual-core processor and 8-megapixel camera

We know the Motorola Droid 3 will be launched at some point this year. And while we don't have all...