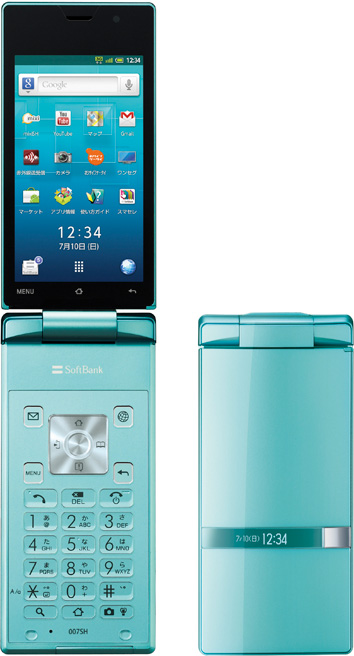 Japanese operator SoftBank has just announced the Sharp Aquos Hybrid 007SH, the very first Android smartphone to come in the clamshell form factor. It packs Android 2.3, has a 3.4 inch touch screen with a resolution of 854 x 480 pixels that can also display 3D content, 16 megapixel camera that can also capture 720p video, and it’s even waterproof. Clamshells are popular in Japan because they’re easier to hold, important for many with a long commute, they protect your screen should you happen to drop them, and best of all, unlike the popular slab of glass form factor that’s popular in Europe and America, you can use your large screen without having your fingers getting in the way and obscuring what it is you’re trying to read or look at. For those who would rather have a slab of glass, the display in the 007SH rotates 180 degrees and collapses onto the keypad. Now for the important question: Will it ever come to America? Like most Japanese phones, the answer is no, and words can not begin to describe how sad that makes us. The 007SH is special, despite the fact that it’s nearly 20 mm thick.

We frankly don’t understand why handset makers in Japan like Sharp don’t try to enter the international market with the devices they spend millions of dollars on developing in their labs. Just because sales might potentially be lackluster is different markets isn’t an excuse to not even bother trying. Strip out the Japanese exclusive features like over the air TV and that proprietary implementation of NFC done by Sony and you’ve got yourself a superphone that many would be happy to shell out $1000 or more for. Anyway, what do you think of the 007SH, is it too over the top, or is an absolutely delectable piece of engineering?

The HTC Flyer is finally available and the 7-inch Android tablet packs some spiffy features which may make it stand...