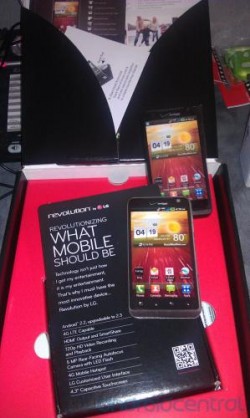 Promotional materials for the LG Revolution have just been spotted and it’s about time. Set to launch this Thursday, the Revolution is Verizon’s first high-end Android phone from the handset-maker and it’s more than welcome into Big Red’s portfolio.

LG has seriously stepped up its games with its upcoming Android lineup and the Revolution shows us just that. The handset may be a chunker but it’s still pretty light, and it’s a snappy device that supports Verizon’s LTE network. The Revolution also sports a 4.3 inch display, 5 megapixel camera with LED flash, 1.3 megapixel front-facing camera for video chat, Android 2.2 Froyo (upgradable to Gingerbread), and a 1GHz Qualcomm processor. In contrast, LG’s other handsets sport dual-core processors from NVIDIA and Texas Instruments, so you’re going to either sacrifice an extra processing core or a blazing fast data connection, depending on which handset you choose.

The handset has a slightly skinned custom UI running on top of Android 2.2 that doesn’t add much value or take any away. The LG Ally features the same user interface and allowed you to choose if you either LG’s UI or the standard Android home. We hope we see the same with the Revolution.

One highlight for some may be that the Netflix application will be pre-installed on the Revolution. That said, the application has been hacked to allow almost any device stream Netflix content, so it’s less of a major feature. Nonetheless, the Revolution is another great offering by LG that will sit nicely alongside the HTC Thunderbolt and the Samsung Droid Charge.

This Revolution will be the first LTE handset to feature Bing as its default search engine and that could turn some people off to it. Still, it’s a small sacrifice for such a good handset and it’s not like you can’t use Google from the browser. Overall, LG’s LTE handset has a lot going for it, but depending on what features you’re looking for you may find a phone from the handset-maker that may be better for you.

T-Mobile HTC Sensation and retail box spotted in the wild

With the HTC Sensation set to be unleashed not long from now we aren't all that surprised to see the...