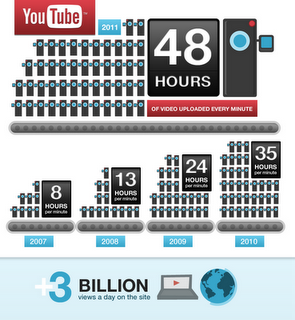 Can you believe that YouTube is already six years old? It seems like only yesterday I was watching friends’ bands play local gigs recorded with crappy cameras, emo video blogs and footage of cats doing all kinds of weird things. But ever since Google bought the video-sharing service in October 2006, it has blown up in a big way.

Today marks its sixth anniversary, but there aren’t any big bashes or balloons to celebrate (unlike last year’s five-year anniversary). Instead, just a blog post that mentions its anniversary along with some facts and tidbits about the service. According to its blog:

Today, more than 48 hours (two days worth) of video are uploaded to the site every minute, a 37% increase over the last six months and 100% over last year.

And it is quick to add:

What can happen in two days, you ask?

The other great birthday present? Your views. We’re amazed that over this last weekend, you drove YouTube past the 3 billion views a day mark, a 50% increase over last year. That’s the equivalent of nearly half the world’s population watching a YouTube video each day, or every U.S. resident watching at least nine videos a day.

That is a whole lotta video watching and uploading, and you can bet that mobile devices play a huge part in all that. Now that you can record videos and upload them straight from your device, like the iPhone, it becomes easier to be part of these statistics. In face, prior to the iPhone launch in 2007, I can’t really recall using my smartphone for viewing or uploading videos to YouTube. Since then, I’ve seen an explosion in YouTube usage amongst my family and friends.
Do you record and upload videos from your Android device or iPhone? Any other smartphone? And do you find yourself watching more videos on your hand-held screen than on the desktop or laptop?
[Via: YouTube]
Share on Twitter Share on Facebook ( 0 shares )