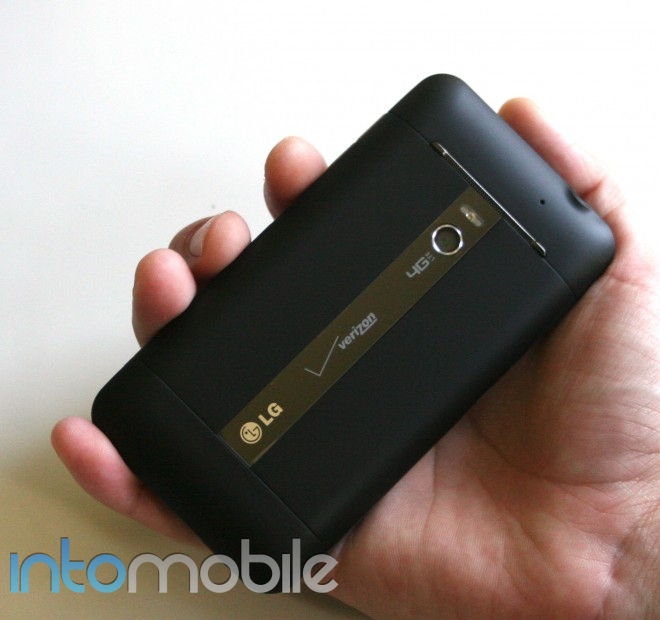 We just unwrapped the LG Revolution Verizon was so kind to send our way and the carrier’s third smartphone with 4G LTE is quite a formidable creature. We’ll have our review up very shortly but we wanted to share a few pictures and videos with you lovely readers first.

The first thing you notice about the LG Revolution is that it’s a solid phone that almost crosses into the brick territory. With a 4.3-inch screen, you expect some heft but it just feels thicker than something like the Droid Charge. It’s not too thick though but you’ll definitely notice it in your pocket.

The screen takes up the bulk of the device’s face but you have four capacitive Android buttons and the front-facing camera. There’s a silver trim on most of the spines and you have to open up the HDMI-out and microUSB doors to get at those ports.

Inside, you have a 1 GHz Snapdragon processor, GPS, Bluetooth and, of course, support for the Verizon 4G LTE network. I’ve only run a few speed tests, so I’ll wait until I get more time with it to see how it performs and if this is any different than other 4G LTE handsets made by other manufacturers. You can also look forward to a 5-megapixel camera that can record in 720p HD, a 1.3-megapixel front-facing camera and a microSD slot that’s not hot swappable.

The LG Revolution also sports Android 2.2 with the Optimus UI that can be found in devices like the Optimus Black, so this includes some custom software for social networking, a solid camera user interface and the ability to uninstall apps directly from the app screen. The LG Revolution also comes with a boatload of preloaded software but before you start moaning, one of those is the rare Netflix app, which could be a cool thing to have in addition to 4G LTE. Oh, it also has Bing search and Bing Maps instead of Google’s stuff.

Check out the pictures below and I’ll throw a video in once it’s done uploading. Anything specific you want to know about the LG Revolution?

Review: Verizon Motorola Droid X2 – The most powerful Droid yet?

Last year when the Motorola Droid X was released there was a lot of buzz surrounding the handset, not the...