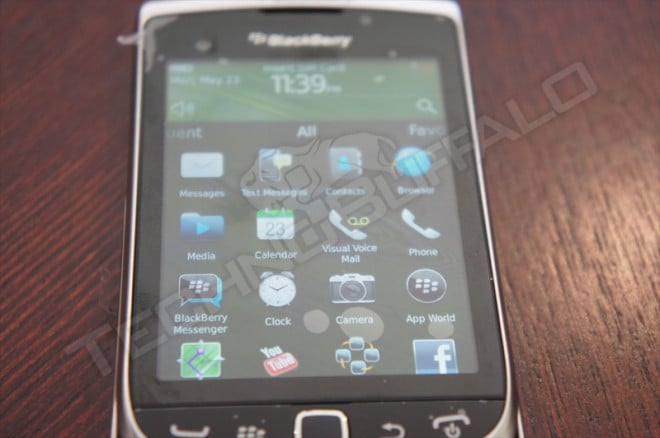 Some crisp shots and a video tour of the upcoming BlackBerry Torch 2 (9810) have surfaced, showing it’s alive, well, and running OS 7. It’s not the first time we’ve seen the Torch 2 on video, but it’s certainly the most crisp and comprehensive walkthrough we’ve seen to date. The hardware isn’t particularly exciting since everything seems to be identical since the original Torch 9800, but it’s really what’s under the hood that counts. The keys on the virtual keyboard are a bit better spaced, and include a bar above so you can hide it without having to dig around in the system menu. Universal voice search doesn’t work quite yet, presumably because the data has to go to a server somewhere and the unit wasn’t connected to the internet.

Visual voicemail is also loaded on there, and would be a welcome sight, considering its current rarity. The browser is still a work in progress, but BlackBerry Protect, a service built for remotely backing up, tracking, and wiping the device, is getting its preload debut. Although we’re expecting the Torch 2 to launch with a near-field communications chip like the recently-announced Bold 9900, there was no option to active it nor the mobile hotspot on the connections management screen (the magnetic compass is still in though, as evidenced by the compass app). The rumoured HSPA+ connectivity is apparently not in yet, but may be included for launch around early summertime. Finally, there’s a section under settings for “smart accessories”, which sounds promising, though there aren’t many new details there.

From what we’ve seen in the leaked spec sheets, the Torch 9810 is expected to have a 1.2 GHz processor, 768 MB of RAM, 8 GB of local storage (plus microSD memory card up to 32 GB), a sharp 3.2-inch 640 x 480 VGA display, 5 megapixel camera with LED flash and 720p video recording. It’s packing the same touchscreen slider form factor as the original, except for a more silvery finish all around. OS 7 includes within it an updated browser, and a new rendering engine called Liquid Graphics, which should help improve responsiveness, load times, and transition animations.

I’m currently using the Torch 9800 full time, and it’s certainly due for an update what with dual-core smartphones coming from all directions, but I may have to opt for the Bold 9900 instead, since it’s likely to have longer battery life, and the revamped form factor holds a lot of appeal. What would you guys pick between the two?

LG Optimus 3D available for pre-order in the UK; Free with 25 GBP a month plans

Good news for our British users looking to grab the LG Optimus 3D. The device is now available for pre-ordering...