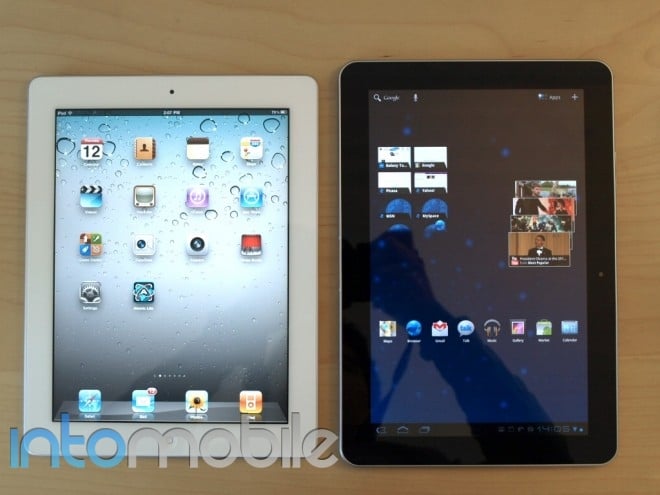 Samsung and Apple are currently in the throes of a legal battle spanning infringements on wireless patents to form factors, and as a part of the review process, Samsung is demanding Apple reveal prototypes of their next iPhone and iPad products to see if they’re overly-similar to their own upcoming devices. Apple has apparently already made the same demand of Samsung, but the big difference there is that Apple hasn’t announced a thing about their next products – the ask is based solely on the assumption (reasonable it may be) that there will be an iPad 3 and/or iPhone 4S announcement before the end of the summer. Ultimately, either party would like to put an injunction on the sale of the other’s products, but that’s all pending further investigation.

Putting the Galaxy Tab 10.1 side-by-side with the iPad 2, it’s easy to see the similarities and how your average non-technophilic consumer might get mixed up between the two. The iPhone 3GS and Galaxy S I9000 bear some striking similarities too. It’s easy to give Apple all of the credit for design, since that’s kind of their thing, and it’s hard to find a Samsung handset that predates the original iPhone and shows any significant similarities, but the real battle here is for future devices. Samsung has already announced what their next products are and shown what they look like, and if Apple launches something afterwards that looks similar enough to be confusing, they may be the ones in trouble.

It’s a tough call to make, though – who do you think will win this fight in the end?

Today at the Computex conference in Japan, Asus has announced an interesting new tablet called the Padfone. Yeah, the name...