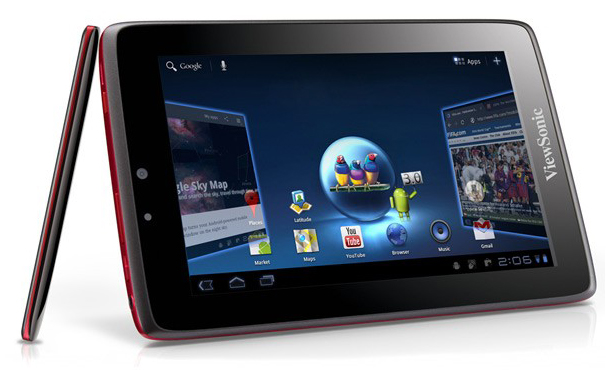 As expected, the ViewSonic ViewPad 7x was announced today, making it the world’s first 7-inch Android Honeycomb tablet. Viewsonic is also touting their ViewPad 10Pro at the Computex show, but the dual-booting Android/Windows 7 tablet was announced back at Mobile World Congress.

The ViewPad 7X has a 7-inch 1024 x 600 screen with HDMI-out, runs on a dual-core Nvidia Tegra 2 Processor, HSPA+ wireless, and Wi-Fi with DLNA home media sharing. Details beyond that are scarce, without so much as a release date or pricing, but it would be surprising to not see either tablet somewhere in the world before the end of the summer. The original 7-inch ViewPad was relatively inexpensive, and we can only hope this one will follow in its footsteps.

This announcement means there’s a viable alternative for those bummed that their original Galaxy Tab won’t be getting an upgrade to 3.0, though there’s no promise for how well it will run. I wasn’t particularly impressed with the stability of the ViewPad 10Pro and MWC, but at least the 7-inch model won’t have to juggle multiple operating systems.

We’ll keep an ear out for more detailed information.

Samsung and Apple are currently in the throes of a legal battle spanning infringements on wireless patents to form factors,...