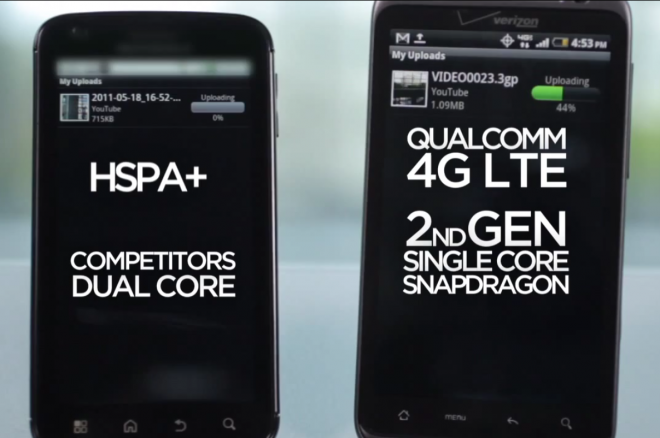 Qualcomm is taking some subtle jabs at its competitors in its latest video, as the company is showing off how well the Snapdragon processor can work with 4G LTE networks for a better user experience.

I’ll let you watch the video below, you’ll see the Qualcomm Snapdragon MSM8660 in a Verizon 4G LTE device against what appears to be a Motorola Atrix 4G with HSPA+ and the NVIDIA Tegra 2 chip. The demo shows that the overall experience browsing, downloading and using the device is faster with the Snapdragon because the company built the processor with connectivity in mind. With the ability to offer handset makers all parts of the chain (processor, power, connectivity, etc.), Qualcomm wants to hammer home the point that it know how to do next-gen connectivity.

This could be construed as jab at NVIDIA, as we have yet to see a Tegra 2-based device land with 4G LTE even though one was announced in January at CES. What’s even weirder is that the device, the Motorola Droid Bionic, has been delayed multiple times and it appears to have switched processors.

In a statement to us, NVIDIA said:

“Tegra 2 has absolutely no compatibility issues with LTE. In fact, Tegra 2 interfaces with many types of modems via standard interfaces, including LTE. There is nothing inherently unique about LTE as far as Tegra 2 is concerned. In fact, there will be Tegra 2 and LTE-enabled devices available soon. Unfortunately due to NDAs, we can’t communicate exact devices or timeframe.”

Nothing like a little friendly rivalry between chip makers, I suppose. Regardless, I’m in beautiful San Diego for the Qualcomm Uplinq conference, so follow IntoMobile June 1 and 2 for all the latest news.

When Microsoft announced the first line of Windows Phones, many were a little peeved that there would be no CDMA...