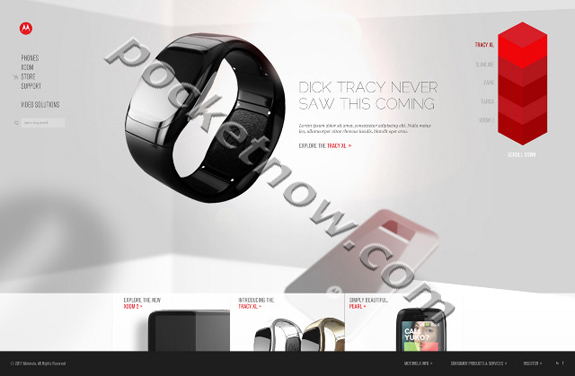 In the midst of a site redesign, Motorola accidentally showed off a bunch of upcoming products (or at least some pretty slick concept placeholders). Two phones, both super-skinny touchscreen slates were shown off, called the Zaha and Slimline. A sequel to Motorola’s Xoom tablet is also spotted vaguely in the background, but the real ostar of the show is a watch device called the Tracy XL. The names Targa and Pearl are also found elsewhere on the new Motorola site, though there are no accompanying images.

Watches are a burgeoning form factor, having been tackled by both LG and Sony Ericsson within recent memory. While their successfulness to date is questionable, it’s a neat new take on a very old idea, and the more manufacturers that try the hand at it, the better our chances of seeing something that actually catches on.

We’ll be keeping an ear out for more details on all of these devices in the off-chance that they aren’t just the daydreams of some in-house designers. What do you guys think – does it make sense to you that Motorola would make a watchphone?

T-Mobile announced two new affordable Android smartphones - Samsung Exhibit 4G and Samsung Gravity SMART, both of which should be...