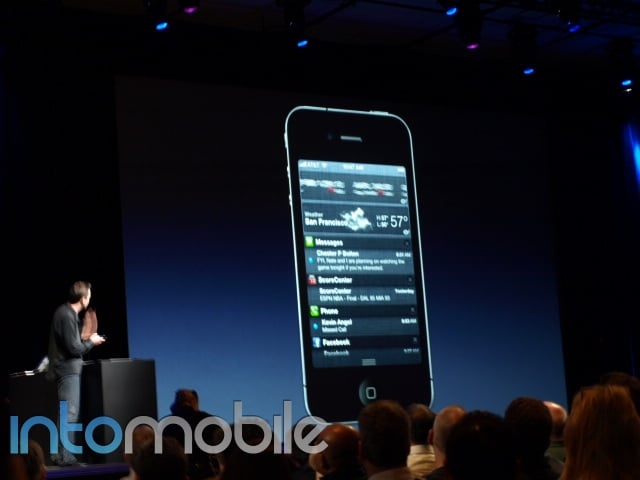 The Apple team just unveiled iOS 5.0 at WWDC 2011 and it features more than 200 new features for end users. If you’re familiar with the other operating systems, you’ll know where Apple could have got some of its inspiration.

One of the largest changes is that the Push Notification System is being revamped and this is a much-needed reworking. The original push notification system worked by having a server send a pop-over message to your phone in the middle of the screen. This could be highly-intrusive and if you ignored it for the moment, it would be gone.

The new push notification system in iOS 5.0 will give you a subtle indication that you have a message (or other notification) at the top and you can pull down a window shade to access these. Hitting the notification will throw you directly into the app that’s related to it. Does this sound like Android? Well, it should.

Android has long been able to use this pull-down curtain metaphor to see notifications and this is a good way to see what’s going on without having your whole work flow interrupted. I don’t feel like the shade has to actually come all the way down the screen and I would love to see line-item dismissals, so maybe we can see that in iOS 5.0.

The Camera app has also received many new features including on-board editing capabilities, deeper Twitter integration, the PhotoStream iCloud sharing service and more but one of the neat little things is being able to hit the camera icon on the lock screen to quickly take pictures. We’ve all had a situation where we wanted a magic moment but we missed it because we fumbled to unlock the phone, launch the camera app and then snap the photo. Even if you have a passcode on, you can jump into the camera but not get into the other information.

This is an amazing idea that I love … I loved it even more when I first saw it on Windows Phone 7. The iPhone 4 does produce better shots than most of the Windows Phone handsets I’ve seen though, so I can’t complain about making it easier for iShutterbugs to get off quick pictures.

The iMessage app should be wildly popular because it lets you talk to other iOS users via text, videos and photos and it won’t cost you additional texting or messaging fees. It also means there’s a certain air of exclusivity because only your iOS friends can use this. If that doesn’t sound like BlackBerry BBM, I don’t know what does.

I am absolutely delighted that you won’t need to plug your iOS 5.0 device into a computer to activate it, as there are plenty of people who either don’t have a traditional computer or hate the hassle of firing up iTunes. You should be able to soon just pump in your iTunes ID and password to set up your device. Once again, Android users have known how “magical” this feeling is for years.

I see nothing wrong with Apple borrowing features from other platforms for iOS 5.0, as these will likely lead to better products for consumers. Many moaned about the lack of copy and paste on iPhones but when it finally came, it was implemented in a delightful way. There’s nothing wrong with borrowing from other companies. Unless you’re Samsung, I guess.

Apple iOS 5: Notifications, iMessages and everything else you need to know

Today Apple announced iOS 5 at WWDC 2011 and it comes with a number of new features and improvements. The...